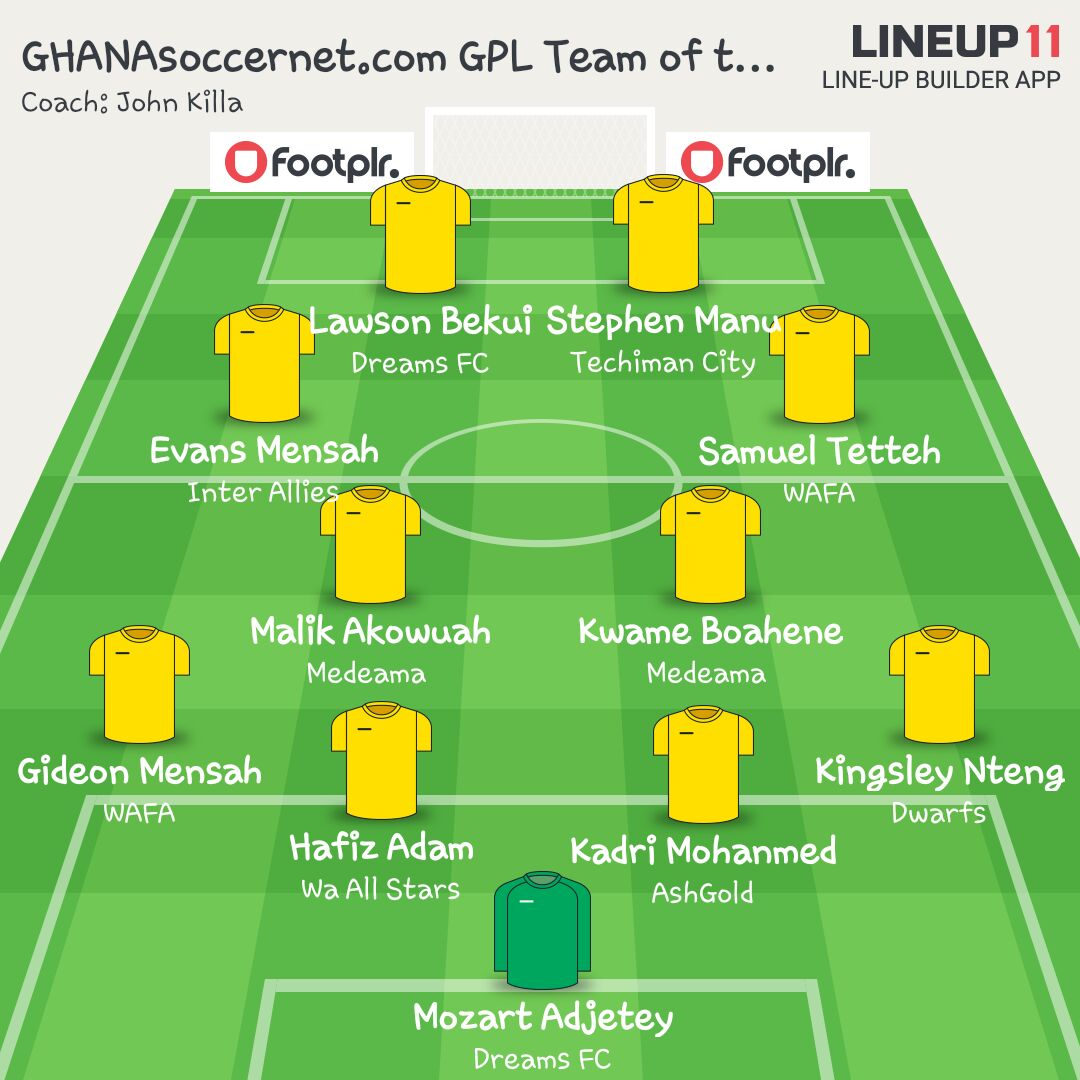 WAFA and Inter Allies midfielders Samuel Tetteh and Evans Mensah made it into the GHANAsoccernet.com Team of the Week as the only players to have appeared again after their opening day appearance.

The remaining nine players are making it for the first time with Coach John Killa of WAFA winning the coach of the week.

The Dreams FC goalkeeper was the reason why the visitors secured a point at the Tema Park. Even though Mozart conceded twice, the visitors could have conceded more goals but for his timely interventions. Mozart pulled wonderful saves including saving Wahab Akwei’s penalty which could have seen the home side taking all three points.

One game that could not live up to the hype is the Dwarfs – Hearts clash. The over determination of the home side to win the match and the visitors not to concede saw the game turning into a physical combat. However, Kingsley Nteng rose to the occasion with an outstanding performance to win the MVP of the afternoon. And from the list of best performers of the week, he is among the best defenders. So hardly getting a 'real' right back with the best of performances, Nteng is used as a make-shift right back having won the MVP of the afternoon.

The WAFA left back was just a delight to watch. Gideon'’s surging runs on the flanks and his crosses on the day were apt. He hardly gave a ball away as he was a good passer of the ball in the game. He was the chief orchestra of all the set pieces of the WAFA side in the game and provided an assist.

Kadri Mohammed was the main man in the heart of Ashgold’s defense who made sure the chief tormentor of Berekum Chelsea, Saddick Adam was fruitless in the game. Saddick was determined to punish his former side after showing signs with two early thunderbolts but Kadri cut him out of the game. His defensive agility and long passing ability earned him the MVP of the afternoon.

After keeping a clean sheet in three matches, Wa All Stars have no one to praise than Hafiz Adam. The center-back ensured that Liberty’s attack was not functional throughout the 90 minutes. Liberty had won the last time they met in Wa but Hafiz made sure that achievement was not replicated. He topped-up his performance with the MVP.

His free kick against Asante Kotoko was a master class. He was the heart of the Medeama midfield and gave tailor-measured passes to Bernard Ofori and Benjamin Bature. His leadership on the field ensured that they did not give up when Michael Yeboah fetched Kotoko’s second goal. He encouraged the side to fight on and capped it with the MVP award of the game.

He fetched the first hat trick of the season in the clash at home with Hasaacas. He was the player of the match and his swift dribbling qualities were outstanding. Samuel Tetteh is perhaps establishing a strong case for himself to remain in Avram Grant’s Black Stars.

While Malik Akowuah was encouraging the Medeama side to keep fighting for the ultimate, Kwame Boahene was the chief tormentor of the Kotoko defense. He was swift and excellent on the day and his dribbles attracted all the bad tackles. Malik Akowuah’s free kick resulted from a bad tackle on Boahene at the mouth of the Kotoko eighteen.

He squandered a penalty but rose to the occasion to score the winner with an intelligent assist from Baba Mahama. BA they call him, Manu tormented the Aduana Stars defense and made sure the ultimate is secured for the home side. He capped his performance and the goal with the MVP.

Lawson Bekui was the major reason why Dreams FC had a point at Tema against Inter Allies. He was simply too strong for the Inter Allies defense as he opened the scoring for the visitors before the home side equalized. He shot his side in the lead again before the home side again called for a point. Bekui’s performance on the day is likened to Henry Thiery as he was flawless in converting his chances.

He did not only win the MVP of the afternoon, he was also on the score sheet. Evans Mensah won the MVP for the second time and found his name on the score sheet again for the second time. He was the one who restored hope for the home side when Lawson Bekui shot them ahead. Evans’ intelligent display and swift inter-positional movements made him a delight to watch against Dreams FC.