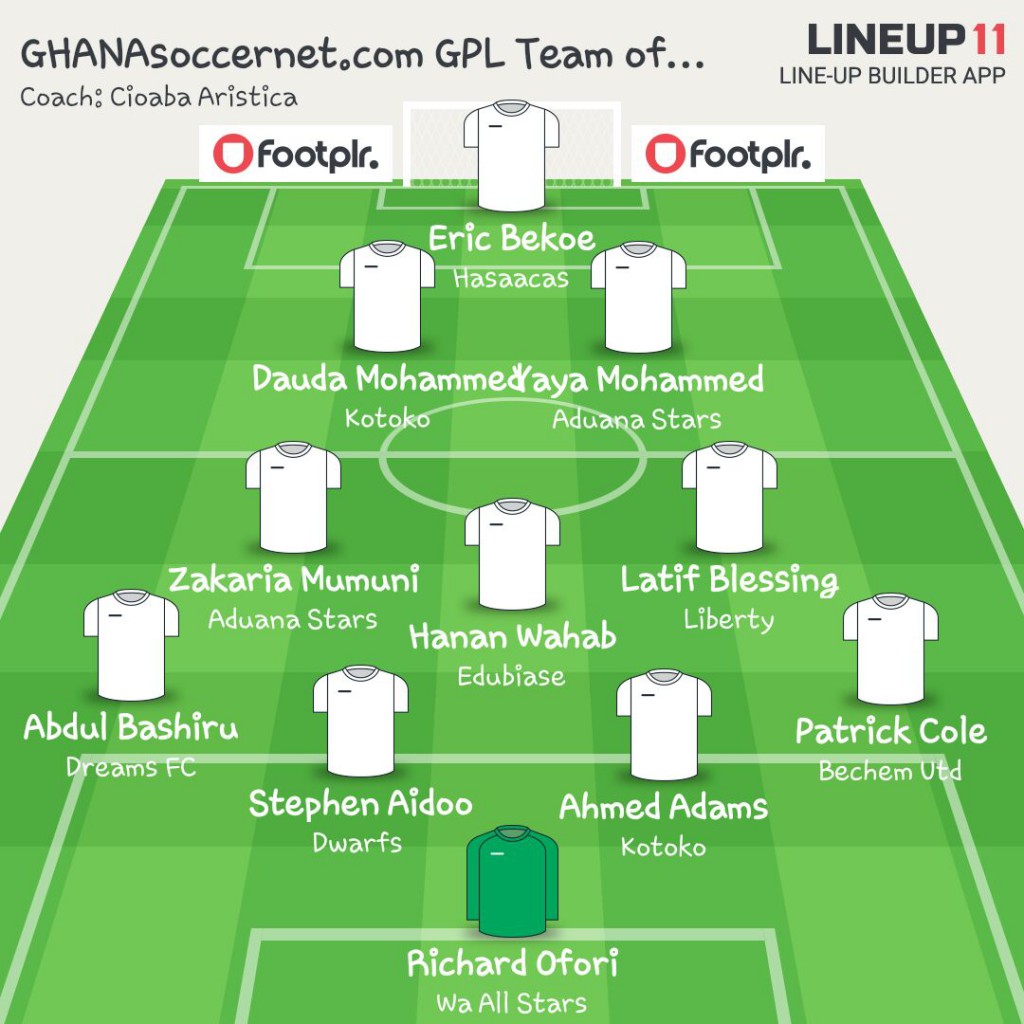 Liberty wonder-kid Latif Blessing made it into the Team of the Week for the 8th time in ten with Yaya Mohammed of Aduana Stars making it for the third time.

Hanan Wahab of New Edubiase returned into the team after a week’s absence following his thunderous strike for the Yenko Nkoaa lads in Obuasi over Chelsea.

Eric Bekoe continued his amazing performance for Hasaacas with a well taken strike against Dreams FC in Dawu despite their 2-1 loss.

The system for the week is 4:3:2:1 with Aduana Stars coach, Cioaba Aristica emerging the Coach of the Week.

Below is the team of the week.

Although the Local Black Stars shot stopper conceded a goal in the game, his splendid saves ensured that the Wa-based side was not humiliated by Medeama SC. He pulled several mind-boggling saves and won the MVP of the game.

The Bechem United right back was superb in their 2-0 win over WAFA. His surging runs on the right flank added fluidity to the home side’s attack. He emerged the MVP after his wonderful performance.

The Dreams FC captain was just a delight to watch against Hasaacas at the Theatre of Dreams in Dawu. His control and organizational responsibilities on the field were just marvelous. He won the player of the match to confirm his great show.

Adams was completely intelligent in the Kotoko defence. His partnership with Evans Quao was as solid as an igneous rock. He was composed and his timing for balls were excellent. He ensured that Kotoko did not feel the absence of Ewdin Tuffour who was red carded when the game was 30 minutes old.

The Ebusua Dwarfs captain rose to the occasion to ensure that his side had a point after AshGold had taken the lead in the first half. His leadership was clearly manifested as he organized his defence well and issued instructions to attackers for better positioning. He won the MVP of the match.

The former MTN Soccer Academy runner up has been a tremendous addition to the New Edubiase side. He was superb again in the game against Chelsea and his thunderous strike won the day for the Yenko Nkoaa side.

For the 8th time in ten, Latif Blessing has been in the team of the week. He fetched the opener for Liberty in their 2-3 home loss to Aduana Stars. His consistency in goal scoring is just amazing. He was a thorn in the flesh of the Aduana defence which compelled head coach Cioaba Aristica to convert winger Daniel Darkwah into a left back to handle him.

The former WAFA man was the chief architect of the Aduana midfield. He was the reason for their first away win of the season on Sunday. He scored the first goal for Aduana before Yaya Mohammed and Benjamin Sasraku added to steal the win. He won the MVP for his amazing performance.

The Hasaacas striker continued his amazing performance for the Doo Boys with their only goal in the game. He was unlucky to have been denied his second by the cross bar. He was the chief tormentor of the Dreams FC defence.

The former Asante Kotoko player has scored in the last three matches for the 2010 champions in the league so far. He scored the second goal for Liberty to restore parity before Benjamin Sasraku came from the bench to hit the killer. He was too strong for the Liberty defence.

The young Asante Kotoko striker was simply amazing in the Super Clash with Hearts of Oak. He was too strong a striker for Hearts captain Robin Gnagne to handle. He had several shots on target but was unlucky not to have appeared on the scoresheet. He won the MVP of the match.