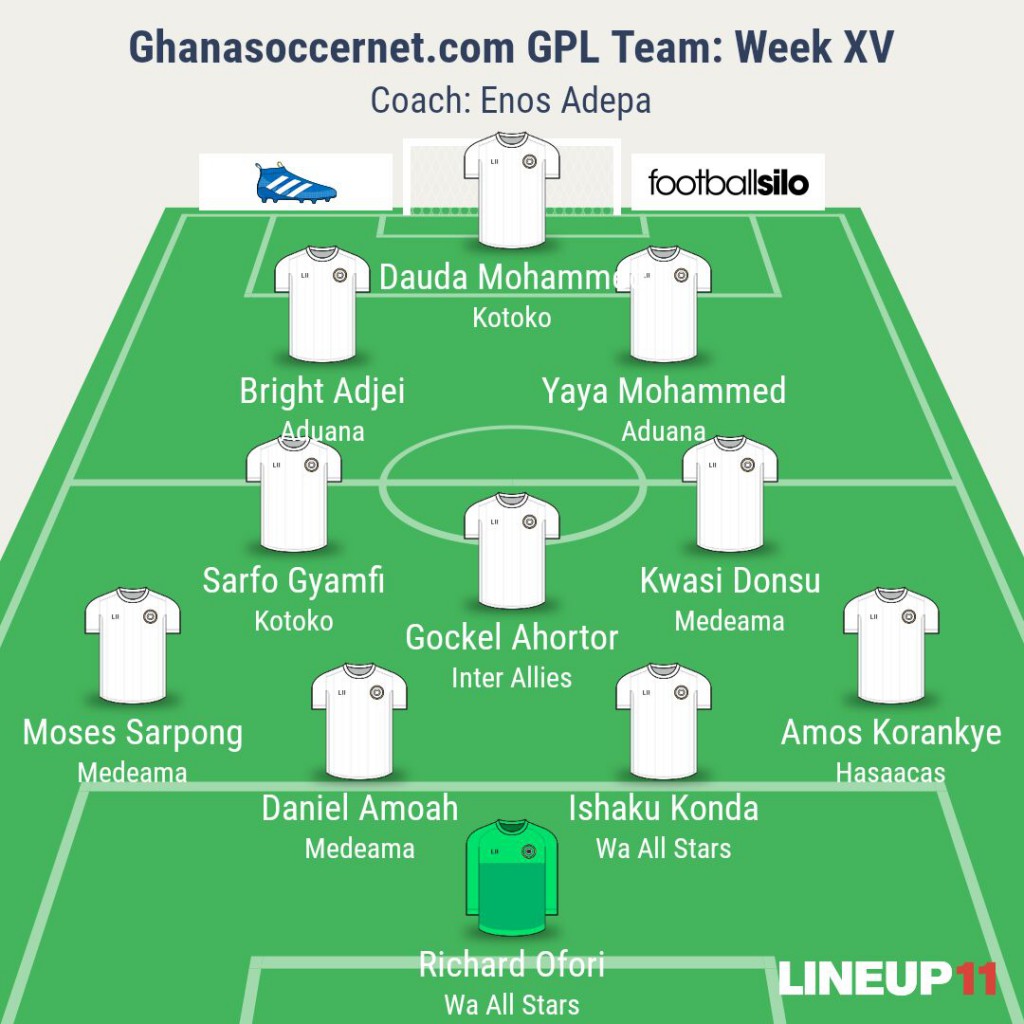 The last matches of the first round of the Ghana Premier League were played over the weekend and Asante Kotoko striker Dauda Mohammed ended the round in a stupendous style.

Dauda registered a hat trick against Techiman City while Yaha Mohammed hit a brace for Aduana Stars against Bechem United.

Wa All Stars coach Enos Adepa emerged the coach of the week while his club is voted the club of the week.

The Black Stars goalie made four great saves. He assisted his side to pick the only away win this weekend. His close contenders were Richmond Ayi and Razak Abalora. But while Ayi made 4 saves, he conceded 4 goals with Abalora making 4 saves to pick a point.

For the second time in succession, the Hasaacas right back has been voted the MVP. He was excellent against Inter Allies and assisted the Hasaacas goal.

Sarpong was superb for Medeama in their clash with New Edubiase. His surging runs on the flanks added fluidity to the Medeama attack. He defended well and gave good crosses.

Konda is one of the reasons Sadick Adams did not score at Berekum. He was excellent in defence for the league leaders. He completely shut down Sadick.

He scored the opener for Medeama before Kwasi Donsu added the second. He stopped Edubiase attacker Prince Antwi and supported the attack when he was supposed to.

He fetched the equalizer for Inter Allies against Hasaacas at Sekondi. His tactical and technical ingenuity was the engine of the Inter Allies side. He earned his side a point.

He saw most of the ball than any other Kotoko player in their clash against Techiman City. Even though he couldn’t score, he came close on two occasions. His speed and dribbling ability was a great addition to the Kotoko side.

He scored Medeama’s second goal from a sensational strike. He was perfect in midfield and organized the Medeama side well.

He registered a hat trick against Techiman City and won the MVP of the game.

He hit a brace for Aduana in their 4-2 win over Bechem United. He was the chief tormentor in attack for Aduana.

He scored twice for Aduana against Bechem United. He combined perfectly with Yaya Mohammed to torment the Bechem United defence.