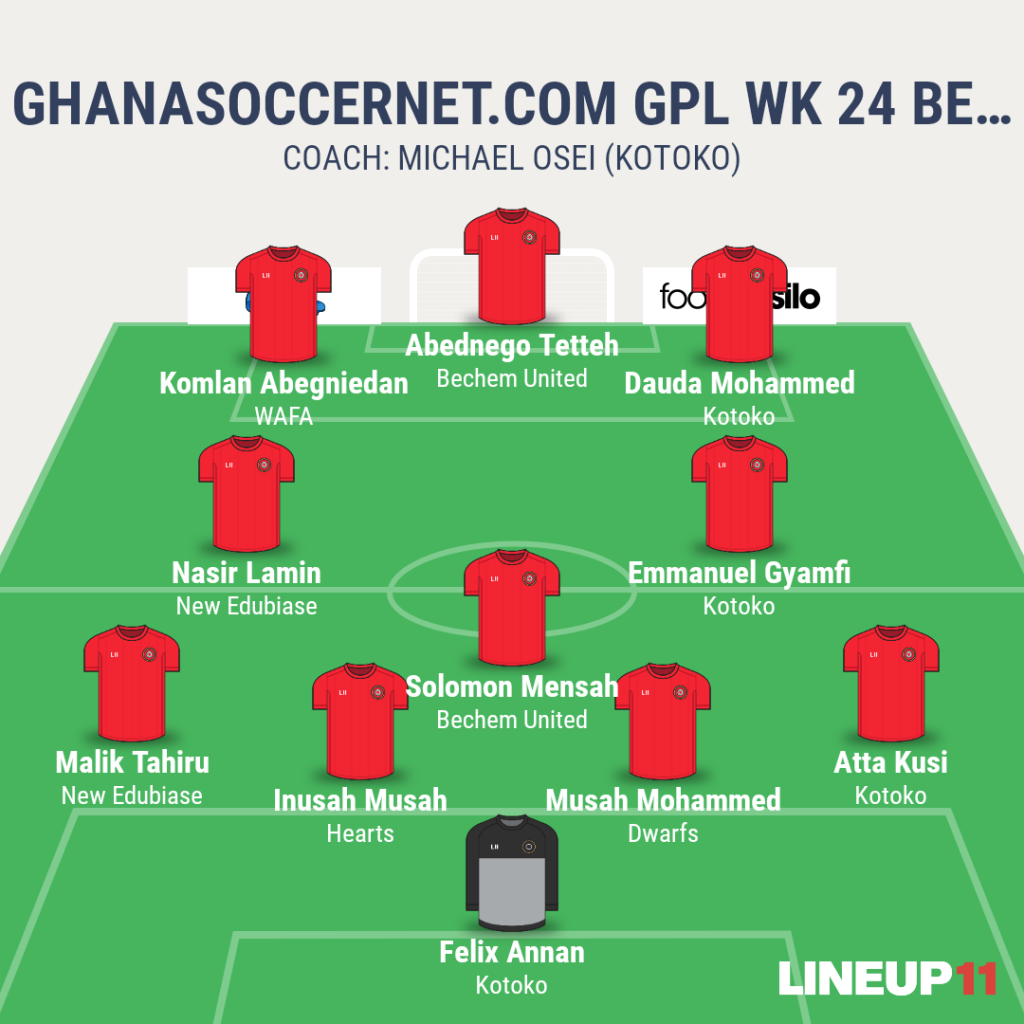 Bechem United forward Abednego Tetteh's brace nailed Inter Allies while Kotoko striker Dauda Mohamed and Hearts defender Inusah Musah made a comeback after some weeks absence but Komlan Abegniedan of WAFA retained his position in the team of the week.

1. Felix Annan -GK (Kotoko): Annan made a fantastic return for the Porcupine Warriors and guided them to a 2-0 win over Liberty Professionals at Dansoman. He made some saves from the few attacks Liberty made even though Kotoko were better on the day.

2. Atta Kusi (Kotoko): Another Kotoko player picked the right back position following his marvelous display for the Reds. He was excellent and kept a brilliant check on the Liberty attackers.

3. Malik Tahiru (New Edubiase): The New Edubiase left back was brilliant on the day against WAFA even though his side failed to pick all the three points at the Nana Gyamfi Park.

4. Musah Mohammed (Dwarfs): The Ebusua Dwarfs center back displayed an excellent performance against the dreaded Wa All Stars by guiding them to victory. He won the MVP of the game.

5. Inusah Musah (Hearts): The brilliant defender made a comeback from suspension with yet another appearance in the team of the week. He was excellent against Techiman City and won the MPV of the game.

6. Solomon Mensah (Bechem United): The young midfielder displayed brilliance in their 2-0 win against Inter Allies. He was great in the game as his passing and movements contributed a lot tof the game. His tackles were spot on.

7. Emmanuel Gyamfi (Kotoko): The former Wa All Stars winger was the brightest spot in the Kotoko side as they nailed Liberty by 2-0 at Dansoman. He won the player of the match.

8. Nasir Lamin (New Edubiase): The Edubiase general captain rose to the occasion by fetching their only goal for them. His leadership and general team.play and brilliance was clear for all to see. He was adjudged the MVP of the game.

10. Dauda Mohammed (Kotoko): Anyone at the Alhaji Sly Tetteh Park yesterday lauded Dauda Mohammed for his excellent attacking display. He scored the opener for Kotoko before Eric Donkor added the second.

11. Komlan Abegniedan (WAFA): The WAFA forward demonstrated how vital a striker he is. He fetched a point for his side with a brilliant strike.