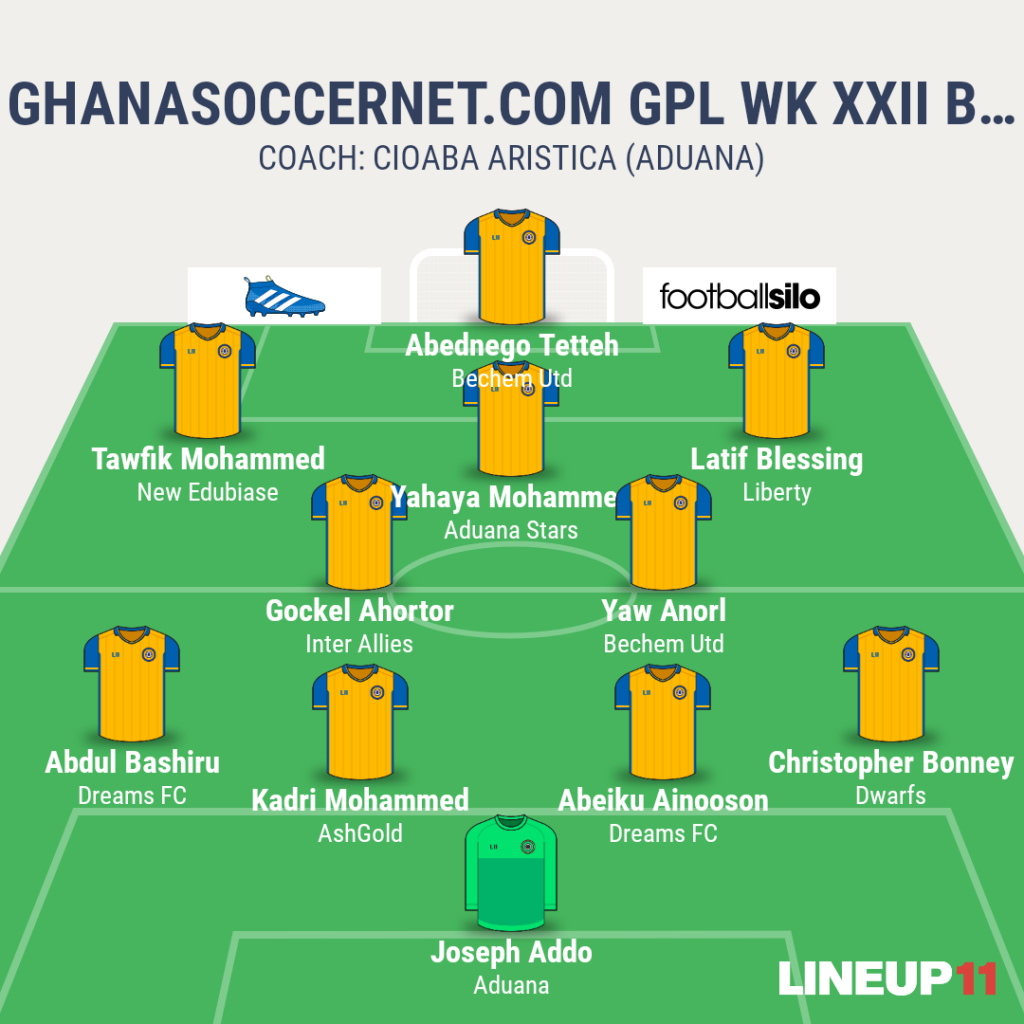 Liberty star Latif Blessing made a huge comeback into the Ghanasoccernet.com team of the week following his impressive run against Hasaacas with three goals to his name while fellow goal king contender Yahaya Mohammed returned with a goal for his side in their away win over Medeama SC.

Aduana Stars' Joseph Addo kept a clean sheet in his side's away win while Tawphiq Mohammed of New Edubiase retained his stay in the team.

The system for the week is 4:2:3:1 with Aduana Stars coach Cioaba Aristica emerging the cache of the week for guiding his side as the only side with an away win.

1. Joseph Addo -GK (Aduana Stars): Addo kept a clean sheet for his side and guided them to steal the maximum three points from Tarkwa. He made countless magnificent saves to guide his side to victory and emerged the MVP.

2. Christopher Bonney (Dwarfs): Bonney was at his usual best again for Dwarfs. He helped his side clinch another win in their rejuvenation campaign. His experience and tough tackling skills were hugely employed to guide the Cape Coast side to victory.

3. Abdul Bashiru (Dreams FC): The Dreams FC captain was excellent in defence for his side. It appears he has established himself as the best left back in the local league so far. His attacking runs and defensive exploits were just on point. He was simply admirable in the game.

4. Abeiku Ainooson (Dreams FC): Abeiku Ainooson was the main pillar in the heart of defence for the Dawu-based side. He pulled the breaks on dangerman Sadick Adams. He fetched the opener from the spot for Dreams in their 4-0 mauling of the Blues.

5. Kadri Mohammed (AshGold): Obviously the best player for AshGold in their 1-1 stalemate with Hearts. Kadri pulled the breaks on the Hearts attack and ensured his side returned to Obuasi with a point. He forced applauds from spectators when he stopped Eric Kumi from a dangerous move.

6. Gockel Ahortor (Inter Allies): Arguably one of the best defensive midfielders in the Ghana Premier League, Ahortor was the main talisman in the middle for the Tema side. He guided his side to register a 2-0 win over title contenders Wa All Stars. He scored the second goal for his side to ensure the won all three points.

7. Latif Blessing (Liberty): Latif Blessing scored a hat trick to become the player of the week. Not only did he score three goals, Blessing was also a hell of an attacker for Hasaacas. He won the MVP of the game.

8. Yaw Anorl (Bechem United): The Bechem United midfielder us gradually becoming a household name in Bechem. He scored the second goal for his side as they sunk Techiman City by 2-0.

9. Abednego Tetteh (Bechem United): The free scoring striker opened the scoring for his side in Bechem. He led the onslaught on the dreaded Techiman City FC and proved a difficult player for the visiting defence.

10. Yahaya Mohammed (Aduana Stars): He shot his goal tally to 13 with the only goal of the game. He ensured his side was the only team to pick maximum points away following their 1-0 win over Medeama SC. His inspiration and motivation for his team mates on the pitch was unmatched.

11. Tawphiq Mohammed (New Edubiase United): For the second time running, Tawphiq found himself in the Best XI of the week. He scored his side's opening goal against Asante Kotoko and eventually emerged the MVP of the game. Just 18 years old, Tawphiq has been a great addition to the ailing New Edubiase United side in the second round of the league.