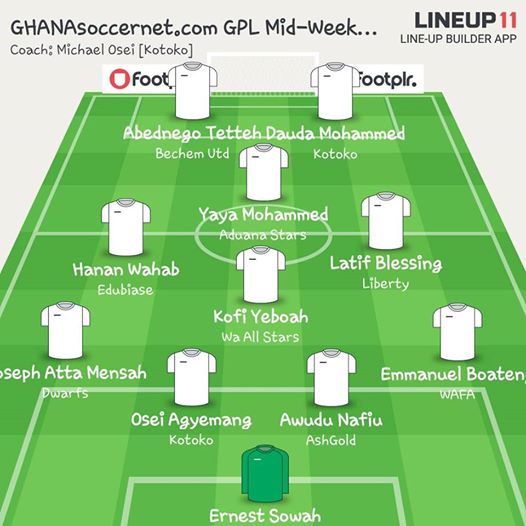 Six players made their debut appearance in the Team of the Week with Asante Kotoko having three players in the team after their gallant show over Dream FC.

Sowah was the reason for Kotoko’s win over Dreams FC at Dawu despite Dauda Mohammed’s fastest goal of the season. He pulled four great saves and organized his defence perfectly.

Boateng was instrumental in earning the visiting WAFA a point at the Accra Sports Stadium. He was quick with the ball and gave accurate passing with his crossings, perfect. His tackles were just excellent on the day.

A perfect left back in the game against Techiman City. Very sharp and smart and showed not glimpses of tiredness. He won the player of the match with his brilliant play.

He won the player of the match in the game against New Edubiase. He ensured that the Miners won their first away game. He was stroing in defence and guided the post well. His presence put fears in the young Edubiase attack.

Appearing for the second time in the Team of the Week, Osei Agyemng stopped the sharp Dreams FC attack from scoring. He quenched their fire to ensure the Porcupine Warriors would go home with their first away victory.

Wa All Stars lost their first game of the season but Kofi Yeboah was just excellent on the day. He scored the equalizing goal for All Stars before Bechem came back. His talismanic performance in midfield was just tantalizing.

He scored two goals for Liberty in their 3-1 win over Chelsea. He was the chief tormentor of the Liberty side and won the Most Valuable Player award as well. He is the only player who has appeared five times in the Team of the Week.

If there is one player who needs to be watched well, it is this 18-year old boy. His Zidane-like play is the reason New Edubiase has a formidable midfield. He scored the opener for the Bekwai-based side before AshGold came back stronger.

He won the MVP and scored the fastest goal of the season against Dreams FC. His sharpness in attack gave Mozart Adjetey a hell of a time. He pressed Godfred Asante to stay indefence to cut his supplies for the midfield.

He scored the first hat trick for the Dormaa-based side and wiped away their striking woes in the game against Hasaacas. He was voted the MVP.

He scored two goals against Wa All Stars to ensure the leaders lose their first game in the league. He won the MVP as well with his splendid striking skills.