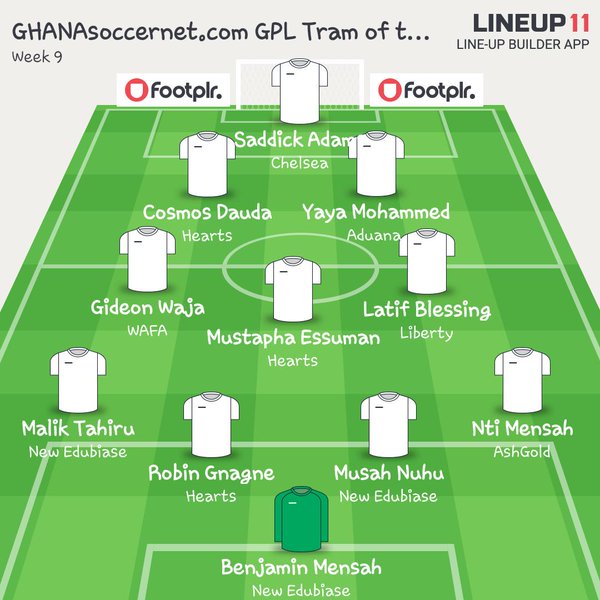 In-form Liberty Professionals winger Latif Blessing once again made it into the Team of the Week for the sixth time out of nine weeks with Yaya Mohammed making it for the second time in succession.

The system for the week is 4:3:2:1 and the Coach of the week is George Lamptey of Liberty Professionals.

He made six great saves to stop Asante Kotoko from fetching the equalizer. He guided his defence well to stop the incessant Kotoko attacks and made sure Edubiase had the three points.

Even though AshGold lost the game to Hearts of Oak in Obuasi, the performance of Nti Mensah was apt. he was up to the task and ensured Eric Kumi was substituted in the second half.

For the second time in the season, Malik Tahiru has found his way back in the team. He was instrumental to New Edubiase’s win over Kotoko. He neutralized the speedy runs of Sarfo Gyamfi and got him out of the game.

He won the MVP of the match against Kotoko. Was very instrumental in the game and stopped almost all the attacks of Kotoko. He took out Obed Owusu and cleverly tackled Dauda Mohammed to avoid a penalty.

The Hearts of Oak captain was the chief organizer in defence for the Phobians. He cancelled out Fuseini Nuhu and scared Osei Baffour from putting up an impressive display.

He was the chief architect of WAFA’s win over Abusua Dwarfs. He won the MVP of the game and created numerous chances for the home side.

He was the most fouled player in the game against Hasaacas. He ensured that Hasaacas recorded their first home loss in the league after creating numerous chances. He won the MVP of the game as well and suffered an injury before the game ended.

Obviously the striker of the moment. Saddick Adams scored a brace for Chelsea against Dreams FC, good leadership and won the MVP of the game. His presence alone was a hell for the Dreams FC defence.

For the second week running, Yaya Mohammed has made it into the team of the week. He scored a brace for Aduana Stars in their game against Medeama. He has since scored five goals in the last two matches.

Dauda Cosmos scored two goals for Hearts to secure all three points at the difficult Len Clay Stadium. His first goal was a master class and his second was sheer intelligence.