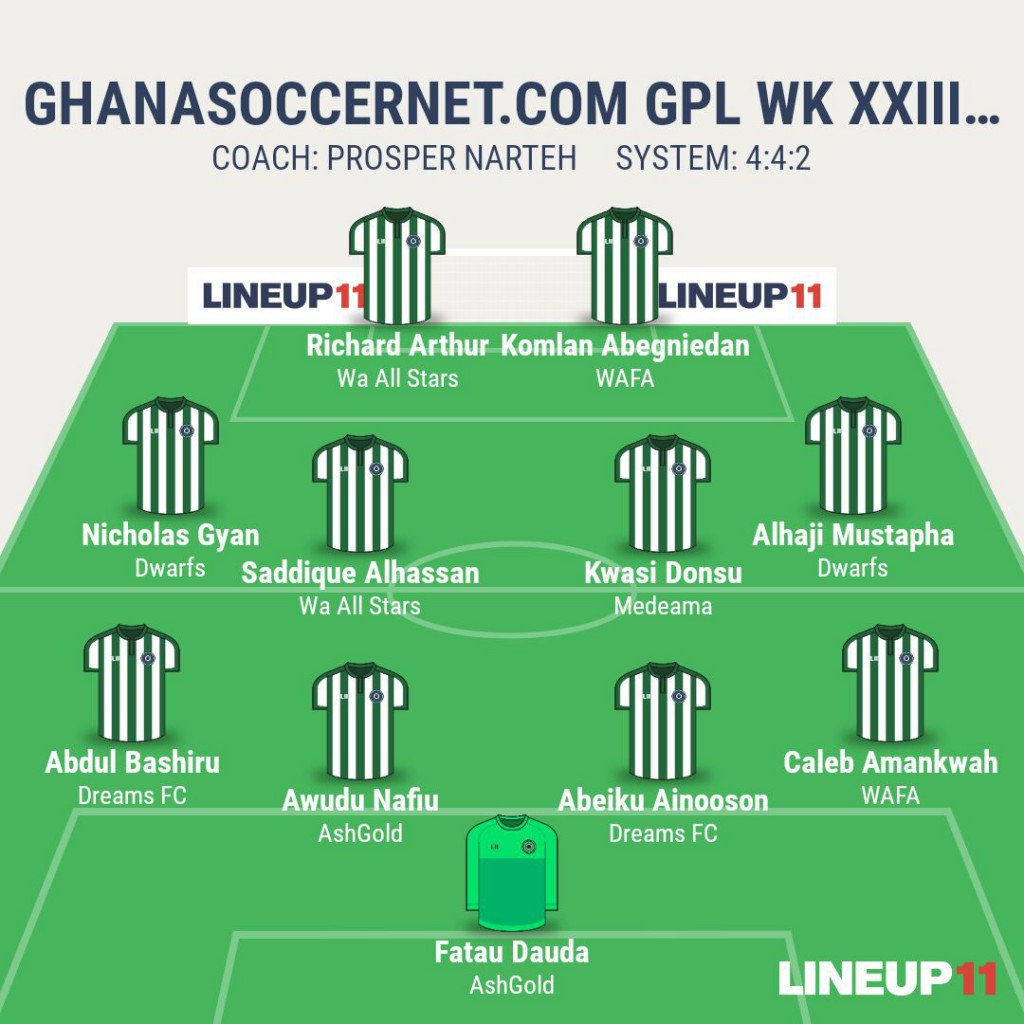 Komlan Abegniedan scored twice to aid his side's 3-0 win over Hearts while Alhaji Mustapha carried Dwarfs to their first away win of the season with Medeama midfielder Kwasi Donsu scoring his eighth free kick of the season to lead the pack of players for the Week XXIII Best XI.

Dwarfs became the first team to beat Techiman City at their backyard while WAFA became the first side to force defeat down the throat of Hearts of Oak after an enviable unbeaten away record.

AshGold and Wa All Stars won 2-0 each against New Edubiase and Bechem United respectively.

Dwarfs emerged the club of the week with their coach Prosper Narteh picking the coach of the week tag.

Fatau Dauda –GK (AshGold): He made three great saves to guide his side to a 2-0 comfortable win over New Edubiase in the Adansi Derby. His close competitors Soulama Abdoulaye, Philimon McCarthy and Richmond Ayi all conceded despite pulling great saves for their sides. Soulama pulled about six great saves but conceded three.

Caleb Amankwah (WAFA): The young right back was solid for his side in their 3-0 thrashing of Hearts. He supported the attack excellently and ensured that Patrick Razak was missing from the game for the entire 90 minutes. His crossings were just on point.

Abdul Bashiru (Dreams FC): The Dreams FC captain lived up to the billing. He guided his side to hold the Reds in a game which was fit for a draw but for Kotoko’s penalty. His attacking runs were an epitome of Marcello of Real Madrid and his crossing, just excellent.

Awudu Nafiu (AshGold): The AshGold center back was the toast of the fans. He stopped New Edubiase new boy Tawphique Mohammed. He won the MVP of the game.

Abeiku Ainooson (Dreams FC): The determination to prove a point against his mother club pushed Abeiku to put up a supersonic performance. He cancelled Kotoko’s attack pair of Kwame Boateng and Dauda Mohammed.

Saddique Alhassan (Wa All Stars): The Wa All Stars youngster lived up to the billing by neutralizing the midfield of Bechem United. He won the MVP of the game and provided an assist.

Alhaji Mustapha (Dwarfs): The Dwarfs stylish player won the hearts of the fans as well as his team mates for his outstanding performance against Techiman City. His only goal earned the visitors the win and made them the only side to pick a win from the Nana Ameyaw Park this season. He won the MVP of the game.

Kwasi Donsu (Medeama): The instrumental Medeama midfielder fetched his side’s only goal and the winner at the Tema Park. He scored his eighth free kick of the season out of the ten goals he has scored. He won the MVP of the game.

Richard Aryhur (Wa All Stars): He scored Wa All Stars’ second goal of the game to aid his side to return to the top of the league table. Not only did he score, his total contribution to the win was phenomenal.

Komlan Abegniedan (WAFA): The Togolese international was the MVP in their clash with Hearts. He scored twice to endure his side won 3-0. He was a thorn in the flesh of the Hearts defence.

Nicholas Gyan (Dwarfs): The Dwarfs captain was just super against Techiman City. His influence on his side was clearly manifested when he guided them to their first away win in the league.