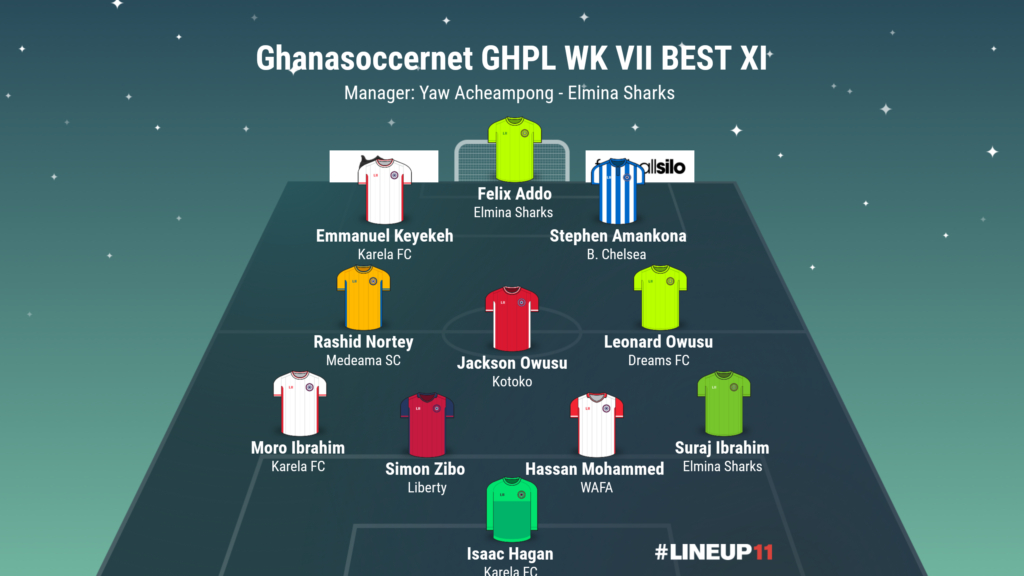 Karela FC grabbed a wonderful lone goal victory over Wa All Stars at the Malik Jabir Park in Wa following a brilliant moment from substitute Moro Ibrahim whose strike gave the visitors all three points while Leonard Owusu's piercing pass for Dwubeng sent Kotoko crying at the Theatre of Dreams.

Felix Addo guided Elmina Sharks to record an important 2-1 win over Hearts of Oak at the Cape Coast Sports Stadium while Stephen Amankona's only strike lifted Berekum Chelsea from the bottom of the table.

Coach Yaw Acheampong emerged the manager of the week for guiding Elmina Sharks to beat Hearts of Oak away.

1. Isaac Hagan (GK) - Karela FC: He kept a clean sheet and gave the visitors cause to go for gold. He made many stupendous saves to deny the home side a goal. He gave his side the win.

2. Suraj Ibrahim - Elmina Sharks: Was strong on the right side of defence for Sharks. He was swift with his runs and provided a lot of decent crosses for his side. He defended nicely and supported attack when necessary.

3. Moro Ibrahim - Karela FC: He was brought on from the bench but emerged the player of the match. He scored the only goal that gave Karela the important win away.

4. Hassan Mohammed - WAFA: He scored WAFA's consolation against Techiman Eleven Wonders. He was strong and smart at the back. He was aggressive and intelligent with his tackles. He occasionally joined the attack when necessary.

5. Simon Zibo - Liberty: He was Liberty's brightest spot. Zibo was strong at the back despite Liberty conceding twice to surrender an early lead. He was resolute and outstanding.

6. Jackson Owusu - Kotoko: Even though Kotoko lost, Jackson was impressive. He was a destroyer in midfield for Kotoko and stopped several dangerous attacks by Dreams FC. He was aggressive, had great distribution and tackled excellently.

7. Stephen Amankona - Berekum Chelsea: He scored the only goal of the game to give Chelsea the maximum points and emerged the player of the match after a fantastic outing.

8. Rashid Nortey - Medeama SC: Unknown to many in the Ghanaian top-flight but Nortey has been a key figure to the transformation story of Medeama. He was instrumental to his side's lone goal win over Inter Allies. He emerged the man of the match.

9. Felix Addo - Elmina Sharks: He scored the opener for his side away against Hearts at the Cape Coast Sports Stadium. He topped it up with a brilliant performance which fetched him the MVP.

10. Leonard Owusu - Dreams FC: His first game for the season and he has already established a commanding image. His deep throat-cutting pass caught the Kotoko center backs defenseless for Dwubeng to fetch the winner. His total out put was splendid earning him the man of the match award.

11. Emmanuel Keyekeh - Karela FC: An instrumental midfielder who was too hot for Wa All Stars to handle. His total contribution to the victory of Karela FC at Wa was phenomenal. He forced applauds from opposing fans with his spectacular display of skills.