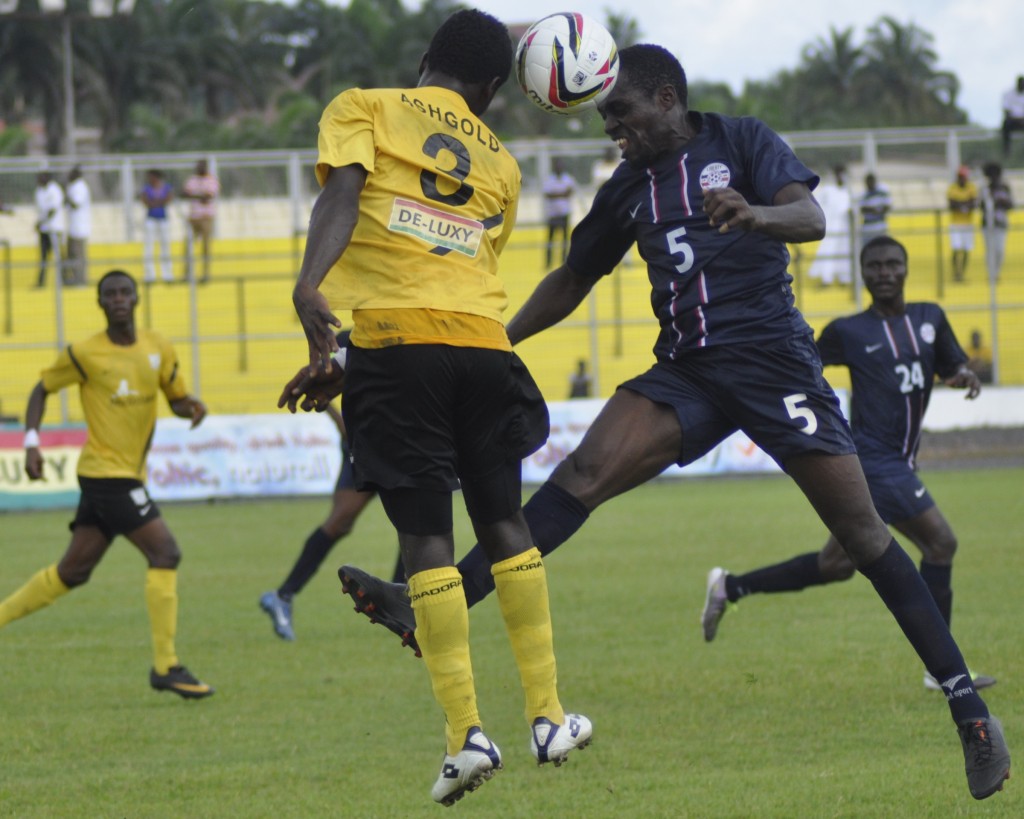 In a weekend full of surprises in the Ghana Premier League, Asante Kotoko remained top of the pack after a hard fought win against New Edubiase.

Aduana Stars took all points with a gritty win against returnees Sekondi Hasaacas.

Hearts Of Oak got back to winning ways in the regional squabble against Inter Allies and there were also other notable victories as Lions, Liberty, Bechem United and AshantiGold all picked up invaluable points during the weekend.

GHANAsoccernet's Saddick Adams puts the star performers in the weekend's matches in his team of the week.

Heart of Lions captain Daniel Acquaye was the first to congratulate the rerturnee goalkeeper on a fine performance.

The point blank save from Daniel Gozah in the first half and a string of memorable saves after the break kept them in the game.

The Kpando-based side needed a win to kick start their season and they did it thanks to the ex Black Stars goalie. Could have done nothing about the penalty he conceded.

It is sad this player does not get the recognition as often. The Berekum FC defender is having a great season so far and his surging runs on the right had Medeama on the back foot all game.

I've been really impressed with his all-round contribution in the tight game.

In the absence of highly rated Godfred Saka, Larbi had to take charge of the travelling Aduana defence specifically on the laterals and he did run all day.

When a defender is influential in both boxes in equal measure you know he's an exceptional player. His run to set up Kofi Owusu for the last minute winner for classy.

The big center-back played like a giant against the King Faisal. His block on the line against Faisal'sSule was sensational and epitomised the spirit engendered by Liberty Professionals. It was an all important win for the Dansoman-based side.

I've watched this lad play a few times for Kotoko recently and I must say he is proving to be an excellent defender with plenty of composure.

His relationship with the rest of Kotoko's defence has been key to the Reds' fine form. Having such composure to cooly plant a penalty in the Edubiase net at that point in time where nobody else would dare attempt was plaudable. He's yet to miss a spot kick in 8 attempts.

For the first time this season, the former AshantiGold midfield dynamo looked like his real self against Berekum Chelsea.

Another Medeama player who gets on with the job, works extremely hard for the team and is not high maintenance.

This lad is in the form of his life. He is starting to display the confidence and produce the performances that I heard he was capable of when he was with Lions.

Morrison has appeared in my team of the week for the second time just this season because in the slim win against All Stars at Len Clay, Morrison was the only livewire.

When David Duncan boldy comes out to refer to a single player out of the lot as the 'Livewire' of his team, you really must know why.

He might not be the most exciting or glamorous player on Hearts' books but he is dependable, indespensable,consistent and capable of scoring goals like he did against Inter Allies.

Two goals from a player who is supposed to be playing 40 meters from goal deserves recognition.

Cobbinah is really a diamond to his side.

Back from Vietnam with a bang. One of the most accomplished midfielders the Ghanaian game has ever seen.

The former Asante Kotoko skipper virtually run the show as Lions dicatated the pace for Amidaus in Kpando.

He's back and looks to have the bit between his teeth.

No goals for the man who loves to score them but his level of work rate was immenseespecially his running past the Amidaus defenders to win a penalty for his side.

Godbless Asamoah's strike against Berekum FC at the Golden City will go down as one of the coolest finishes of the season.

The swift attacker ran from inside his own half, weaving his way past a disunited Berekum defence, before chipping the ball over a helpless John Mossi.

It doesn't get better than that.

If the game was all about will and commitment then Lions' Egyiri would be among the top three strikers in the country.

This lad just never gives up and it must be a sheer joy for manager Yusif Abubakar and his team-mates when the striker gets his rewards in two goals.

It was Egyiri's determination that set the tempo and the tone for Heart of Lions hard win against Amidaus in what might ultimately prove to be the turning point in his club's season.

COACH OF THE WEEK-MIROSLAV BOGDANOVIC (BECHEM)