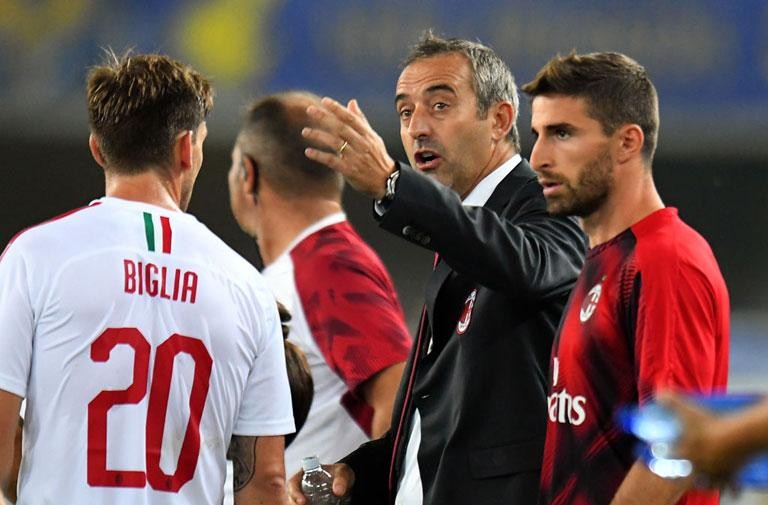 It’s a Friday full of anticipation, hard work and comment. At Milanello, Marco Giampaolo discussed tomorrow night’s derby ahead of the team’s final training session. His comments on AC Milan v Inter were shown live on the AC Milan Official App in Italian and English and on Facebook and Milan TV in Italian. These were the main points from the press conference at Milanello.

HIS FIRST DERBY
“This is a sensation that I will experience tomorrow night but they’ve told me about the atmosphere and passion that lights up this fixture. It’s a very important match that means a lot, the derby makes history by itself but it’s not a crossroads on matchday four. I experienced various derbies in Genoa, I know what it means for the fans, for the atmosphere and the mood in general. I aim to be involved in lots of matches like this. Personally, I’ve approached the game calmly, by working a lot in the knowledge that this is the only way.”

THE MOOD AMONG THE PLAYERS
“I like to have the players focused, eager to play in the game. I’m not interested in any jitters, you don’t need to raise the level because it happens by itself. We don’t need to add anything else in preparing for this game. While being responsible, you need to know how to enjoy the game. I’ve seen the team is calm and these games have to be approached with a sense of joy and enthusiasm. I often tell the players to have fun. As children, we had fun by knocking a ball around and not running behind others. That always needs to be the spirit.”

ANDREA CONTI
“In Calabria’s place, Andrea will play and it’s an opportunity for him. The lad trains well, he’s always focused and he’s improved compared to some months ago. While defending, he’s been very open to working on new things and he’s improved in different ways. He has nothing to prove. He’s not going to war, he’s going to play in a football match.”

LOOKING FOR THE CORRECT PERFORMANCE
“I often think that the work you do and the things you focus on can pay off with turning points in key matches. Sooner or later, you reach a point where you know who you are, you have self-confidence and things become instinctive when you can put what you work on in training into place and every match is a good opportunity for that to happen. You work to optimise every single aspect, playing well is a question of mentality and the attitude you show in the game. In the first pre-season friendlies, the team showed the first signs of what we were looking for, less so in the league but the team has taken things on. This makes me hopeful. Six guys have been able to express this style of football and I think more will be able to in the future. Integrating new players has slowed this work down a bit but I’m convinced that we can have a clear and recognisable identity by working together.”

THE OPPONENTS
“Inter are a clear, defined side. They do things consistently and always look to play their game. The issue is that we need to put in some great collective work, showing great responsibility and tactical maturity. For us, it’s the most difficult game and a big performance will bet needed. We’ll need to be able to read lots of different situations. I don’t know if Inter will come into the game better or worse than us, this match defies all predictions.”

BEING THE UNDERDOG
“The derby is there to be won or lost, I’m not interested in being the underdog. I want the team to play the right game, we must pay a lot of attention to the small details and do well at both ends. I don’t want to have any advantages or disadvantages in the media.”

THE EXAMPLE OF SLAVIA PRAGUE
“We want to do better than Slavia Prague, a lot of the time you can defend by keeping possession of the ball. You don’t need to defend by sitting back, I don’t like that. Our aim is to do lots of good things and you have to work on them. Ideally, I don’t want to be a team that sits back and plays long balls, you need tactical awareness.”

THE MATCH-UP WITH CONTE
"Conte has gone on a big journey. I’ve followed him from the start, I know how he’s evolved. Today at Inter, they play the football from the first version of Conte. I’ve never faced him but I know where he’s coming from, I know what his ideas about football are.”

NEW SIGNINGS
“For me, there’s only Milan. I train 23 players who I’m happy with and for me it’s all about Milan which is above our interests. I don’t discuss individual players.”

INDIVIDUALS
“There was no issue with Paquetá, it was a passing comment, nothing major. Rebić has desire, he’s come here with the right desire and lots of determination. Biglia is an experienced player and he knows how to play in big games. There are lots of characters in the dressing room, lots of leaders and Gigio is one of them.”

THE CROWD
“The supporters are football’s greatest asset, absolutely. I know what it would mean if we could give them a derby win, I’ve experienced it in the past. Even if the sensation only lasted for an hour personally because of my character, I knew what it meant for the fans.”