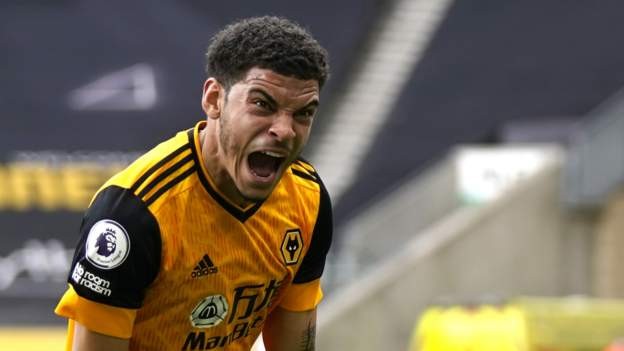 Since his Premier League debut in August 2017, Lewis Dunk has scored 11 goals in the competition, more than any other centre-back, overtaking Virgil van Dijk (10)

Morgan Gibbs-White scored a last-minute winner as a youthful Wolves side came back from a goal down to beat 10-man Brighton, who must now wait to secure their Premier League survival.

In a dramatic finish at Molineux, the midfielder side-footed a superb finish high into the net with just seconds of normal time remaining to reward Wolves and punish Albion for Lewis Dunk's second-half red card.

Dunk was at the centre of the contest, rising to send in a towering header from a corner to give the Seagulls a deserved first-half lead, which the centre-back then helped preserve with a solid defensive display.

But his deserved sending off, coming for a tug of the shirt on Fabio Silva after the forward had darted goal-side of him, altered the momentum of the contest, with a bit of help from the introduction of Adama Traore.

The winger poked in a superb finish with 14 minutes to go in a second half that the home side had previously toiled through despite their one-man advantage.

And then Gibbs-White won it, making amends for a woeful earlier miss with his neat finish to notch up his very first Premier League goal.

To rub salt into Brighton's wounds, striker Neal Maupay received his side's second red card of the afternoon after the final whistle following a confrontation with referee Jonathan Moss.

The win takes Wolves to 45 points, with Brighton remaining 10 points ahead of 18th-placed Fulham and needing one more result to go their way to cement their Premier League place for 2021-22.

Wolves given glimpse of bright future

After a promotion, two seventh-place finishes and a European adventure, this campaign represents a regression for Wolves, its low point the 4-0 hammering they suffered at the hands of Burnley in their last home game.

There are mitigating circumstances, not least the extra demands a Covid-affected 18 months has placed on what is a relatively small squad and the loss of main striker Raul Jimenez to a fractured skull in late November.

It is becoming increasingly clear that some of the Wanderers players are reaching the end of their natural shelf life at the club, but Nuno Espirito Santo is now discovering that some of his younger charges have the potential to succeed them.

At 24 years and 209 days, Sunday's starting XI was Wolves' youngest in a Premier League match since October 2009 - it included five players under 21 and three teenagers.

They were somewhat over-awed in the first half against an experienced and physically domineering Brighton, but were afforded greater room to assert themselves in the second and show a level of composure and character that will please their boss.

Silva has struggled at times this season, but has shown signs of late that he is adapting to the division and he played a key role in the second half, firstly drawing the foul from Dunk that altered the game.

He then played a neat one-two with Traore to set the winger up for his equalising goal.

Gibbs-White is another who has shown flashes of his ability, but not quite the consistency required.

The 21-year-old started the campaign on loan at Swansea in the Championship, but now back with his parent club he can start to build on his undoubted promise.

After a few weeks where it has looked like Wolves were drifting to the conclusion of the season, they now have the first hints of a brighter future.

On results and league position alone, you could be forgiven for thinking little progress has been made at Brighton in their four Premier League seasons, with Sunday's result another negative to add to the list.

However, there has been a clear philosophy shift at the club and signs that Graham Potter is building something more robust and tactically intelligent than his managerial predecessors at the Amex Stadium.

With a full complement of players, they were the better side at Molineux, comfortably mixing a modern desire to play out from the back with older-school qualities of towering goalscoring headers from domineering centre-backs.

Even with 10 men, they were well-drilled enough to restrict the home side to half-chances for much of the second half.

Losing to two well taken goals having played for more than 30 minutes a man down is not something to be unduly concerned by, even if it means a delay in sealing their inevitable survival.

More concerning is the loss of discipline from Maupay at full-time, meaning Albion will now be without their leading striker as well as their captain through suspension.

Dan Burn (Brighton and Hove Albion) wins a free kick in the defensive half.

Conor Coady (Wolverhampton Wanderers) wins a free kick in the defensive half.

Yves Bissouma (Brighton and Hove Albion) is shown the yellow card for a bad foul.

Ki-Jana Hoever (Wolverhampton Wanderers) wins a free kick in the defensive half.

Attempt blocked. Rayan Aït-Nouri (Wolverhampton Wanderers) left footed shot from the left side of the box is blocked.

Attempt missed. Morgan Gibbs-White (Wolverhampton Wanderers) right footed shot from the centre of the box is too high. Assisted by Adama Traoré.

Conor Coady (Wolverhampton Wanderers) is shown the yellow card for a bad foul.

Attempt blocked. Adama Traoré (Wolverhampton Wanderers) right footed shot from the right side of the box is blocked.