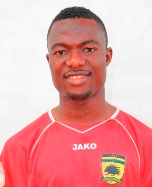 Asante Kotoko defender Gideon Baah is nearing full recovery after an 18-month spell on the sidelines.

The ex-Sporting Mirren player has been out of action since rupturing his shin in a Premier League showdown with arch rivals Hearts of Oak at the Baba Yara stadium in March 2010.

The 19-year-old has been doing a lot of work out in the gym with his physiotherapist and reports say he could be cleared for the new Ghana Premier League season.

Baah, who has a year left on his current contract, endeared himself to the club's fans with sublime performances until sustaining the Â career threatened injury.