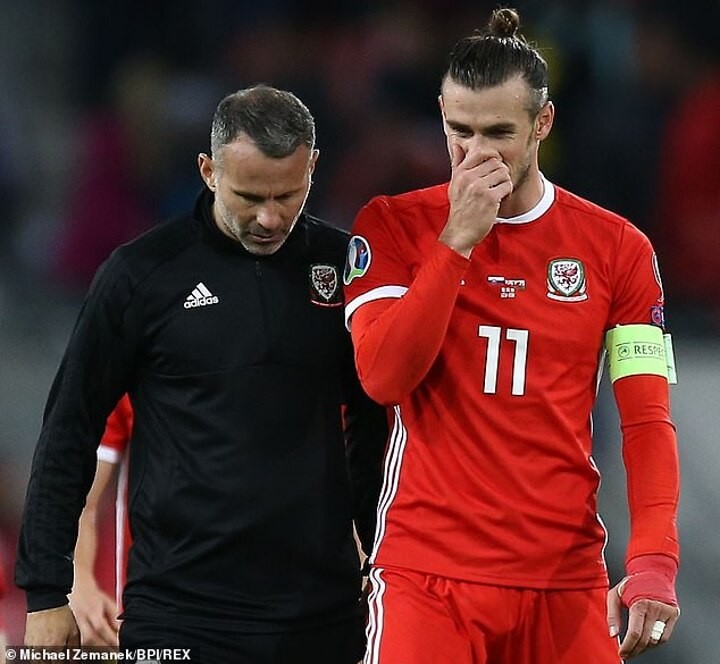 Journalists on Wales Zoom calls have been amused and startled at the regular appearance of a model skeleton looming in the background of one of their colleagues' screens. As a metaphor for the national team's Euro 2020 preparations, it could scarcely be more apt.

With an improving squad and an impressive sequence of results behind them, Wales would normally be considered dangerous outsiders for the European Championship.

Instead, they are hurtling towards only their second major tournament since 1958 with nobody quite sure who will drive the train or plan the route.

When Wales qualified for Euro 2020 with a 2-0 win over Hungary in Cardiff in November 2019, there was every reason to be optimistic. Ryan Giggs was beginning to find his voice as coach of a team of exciting young players inspired by two elite-level talents in Gareth Bale, who captains the side, and Aaron Ramsey.

Sixteen months later, nothing has changed but everything has changed. Giggs is still officially in charge but missed the last international break after he was arrested on suspicion of assault.

Giggs, who denies all allegations of assault made against him, recently had his bail extended to May 1 and it was then decided that his assistant, Rob Page, would continue to take charge of the team in his absence.

Just as he was last November, Page will be on the touchline as Wales begin their World Cup qualifying campaign with matches against Belgium and the Czech Republic, either side of a friendly against Mexico.

Asked about the situation on Tuesday, Bale said: 'Going into the Euros, ideally things are sorted.

'We understand the situation and the FAW (Welsh FA) will obviously be in charge of that. We have just tried to keep it the same.'

Giggs's bosses find themselves in a quandary and time is running out to find a solution.

Unless clarity is brought to the former Manchester United winger's situation soon, it is surely time for the FAW to draw a line and put Page in charge for the Euros. Once that decision is made, others can be taken without the same pressures of time.

As if this upheaval was not enough, Wales are also without a chief executive. Jonathan Ford, who had been in the post since 2009, was placed on gardening leave earlier this year, with his departure confirmed in a terse press release on March 9.

It is thought that Ford, a modernising influence at the FAW, was not universally popular with officials from the amateur and grassroots game on the board.

The easy assumption is that he was ousted by those unhappy with the way the Giggs situation was handled but it is understood that he was vulnerable even before one of the biggest crises in Welsh football history took hold.

The lack of direction behind the scenes means Page — whose only previous management experience is with Port Vale and Northampton as well as Wales Under 21s — is expected to complete preparations for Euro 2020 with no clue about what his role will be when the tournament begins.

Page said: 'Those conversations (about who will lead the team this summer) need to be had further down the road. It's difficult for Ryan at the minute but we just have to make sure the focus is on the players. I am here as the front man but it will be no different from November. Ryan will have an input and rightly so.

'I can understand fans' concerns but we are looking forward to the challenge. We proved that what we did in November has been successful and there's no reason this camp can't be the same.'

Only 80 days before they are due to open their Euros campaign against Switzerland in Baku, Azerbaijan, Wales' build-up looks chaotic. Yet there remains optimism among players and coaches. They need only look across the Severn Bridge to see how unexpected events can work in a team's favour.

When Sam Allardyce was sacked by the FA in September 2016 after one game as England manager, following a newspaper sting, Gareth Southgate was promoted from his role as Under 21 coach. He has since guided England to the semi-finals of the 2018 World Cup and the 2019 Nations League.

Page lacks Southgate's elite playing experience but he won 41 caps for Wales and has a strong relationship with a number of Wales players from his days with the Under 21s. Daniel James, Joe Rodon and Tyler Roberts all played under him at that level and the 46-year-old also earmarked Joe Morrell, Rabbi Matondo and Ben Cabango for promotion to the seniors.

The step from No 2 to No 1 is always difficult, but perhaps less so at international level than in the club game. When players meet only a few times every year, these differences will not be quite so pronounced. And besides, Page has worked with the group long enough to understand the dynamics. Bale, for example, is never more content than when representing his country and Page is smart enough to know how to keep his captain happy.

If only Wales could keep Ramsey fit. The injury-plagued Juventus midfielder has started only three of Wales' last 20 matches and misses these games, too, with a thigh problem.

There has been no apparent drop-off in performance under Page. Nine days after Giggs stepped aside, Wales drew 0-0 with the USA in a hard-fought friendly in Swansea.

They followed that up with victories over Ireland and Finland, virtually guaranteeing themselves a play-off to reach the 2022 World Cup regardless of how they perform in qualifying.

Teams can prosper despite poor preparation. Look at Denmark, who strolled off the beach following Yugoslavia's exclusion, pitched up in Sweden and proceeded to win Euro 92.

Yet as much as players will stress that they focus only on the job in hand, the reality is that distractions — especially ones as significant as these — can be damaging if not dealt with decisively.

Wales cannot ignore the elephant in the room — or should that be the skeleton in the cupboard?