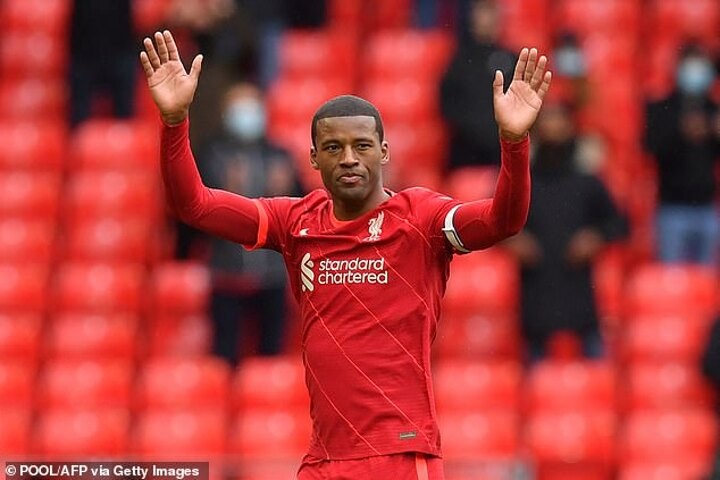 Gini Wijnaldum has a story to tell. His side to his story. About how this midfielder, who wanted to stay at Liverpool, whose influence Jurgen Klopp was so desperate to keep, finds himself smiling down the camera in the stands of the Parc des Princes wearing the badge of Paris Saint-Germain.

There are things he still wants to say. Doubtless, they will include details of contracts and conversations. What was expected and what was offered. Why, after five years at Anfield, he left this summer after his contract expired. The fans, he believes, deserve to know.

It fits more than he knows and, soon enough, there are things the 30-year-old, fresh from impressing for Holland at Euro 2020, cannot keep back.

He talks about how he's been made to feel loved at PSG, in their negotiations with him, in explaining the project under Mauricio Pochettio, a manager who tried to sign him for Tottenham while he was still a Newcastle player.

It's that love, he says, that he did not always feel towards the end of his time at Liverpool.

'There was a moment I didn't feel loved and appreciated,' says Wijnaldum. 'Not [by] my team-mates, not the people at Melwood. From them I know, I can say they all love me and I love them. It was not from that side, more the other side.'

The other side. A phrase open to interpretation but it does not feel too much of an assumption to sense that Wijnaldum's words are directed at the boardroom.

How the story goes so far is that Wijnaldum and Klopp were desperate to extend his stay. His importance to Klopp was beyond question. Only Mo Salah, Trent Alexander-Arnold and Andy Robertson played more outfield minutes for Liverpool in the Premier League last season.

However, the club's owners FSG were unwilling to budge on their strict policy of refusing to hand out long, lucrative contracts to players over 30.

It's not just from the owners, if that is who sits on 'the other side', who made him feel unloved. Wijnaldum also says he was singled out, unfairly, by some Liverpool fans online.

'I have to say also there was social media. When it went bad I was the player who they blamed – said that I wanted to leave,' he says. 'Every day in training and in the game I gave everything I had to bring it to a good end. During the years, Liverpool meant so much to me and also the way the fans in the stadium were treating me.

'On social media, if we lost, I was the one who got the blame. There was a moment when I was like 'wow, if they only knew what I was doing to stay fit and play every game'. You get players in their last year who are like, 'I'm not playing because it is a risk'. I did the opposite. I was training hard, I was giving everything. I didn't always play good but after the game I could look in the mirror and say 'I trained hard to get better'.

'I think the fans in the stadium and the fans in social media – my feeling was that they were two different things. In the stadium, I can say nothing bad about them. They always supported me. Even when they came back [into the stadium], already knowing that I was going to leave they still supported me and in the end they gave me a great farewell.'

Wijnaldum's final game came on the last day of the season against Crystal Palace, in front of nearly 10,000 supporters back at Anfield, now able to say goodbye. He was made captain and given a guard of honour. He soaked in the adulation when he was subbed late on and struggled to hold back the emotion in his interviews after the game.

'It was really difficult. A lot of time I had to fight against my tears. The love everyone showed, and after the game. I didn't realise that would happen. It was beautiful. For weeks after I thought about it. It was really special. Not every player who leaves a club gets it.'

It was not always this way online.

'In the last two seasons, I had it a few times. I also have to say the media didn't help. The media brings stories out, the fans believe that story but they don't know if it's true or not. They have an opinion about it. So it was really difficult.

'There was a story saying I didn't accept the [contract] offer because I wanted more money and the fans made it like 'okay, he didn't get the offer so he doesn't try his best to win games.' Everything looked like it was against me. Some moments it was like "Wow, me again?" It's a collective. But in the team I never had that feeling.'

Wijnaldum describes himself as a person who always laughs and enjoys the things he does. You sense that, even if just by how much he smiles.

Muhammad Ali is the sportsman who inspires him the most, not just because of his career, he says, but of his standing in life and how he looked to help people.

Wijnaldum is someone who leads from the front too, and by example. At Euro 2020 he wore the rainbow captain's armband against Hungary and said he would walk off the pitch if racially abused. Klopp, in his farewell message, described him as an 'astonishing person'.

One of the moments Liverpool fans will remember forever was when Wijnaldum came off the bench in the Champions League semi-final second leg against Barcelona and scored twice as Klopp's side won 4-0 to overturn a three-goal deficit and reach the final. One they would go on to win.

Wijnaldum's memories of it are a bit less rosy. Furious at Klopp after being told in the morning he was not starting, was then asked to come on and drop into a back three when Liverpool had the ball.

'Klopp probably spoke to me but I was so angry at him I didn't listen to what he said,' says Wijnaldum. 'Pep Lijnders [Liverpool assistant manager] told me when we build up, you have to come as a back three because the wingbacks always go higher so if you come as a back three, you can get the ball with the build-up. In my head, I was like, no no no, I'm not going to do that. I just try be up front and trying to score goals. I was so angry that I wanted to do my own thing and in the end it helped.'

So, two years later, after helping Liverpool to the Champions League and their first league title in 30 years, Wijnaldum and the club parted ways.

Barcelona looked nailed-on to be his new club, only for four weeks of negotiations to prove fruitless. Barcelona's financial turmoil meant they could not offer what was expected and French giants PSG were much more willing and able.

'They showed me, not only in negotiations but also with when they spoke to me, when they explained to me the project, how much love they showed me, and how much they wanted me to join this club,' said Wijnaldum. 'That was it for me. I was happy. It was a good feeling. And what they did in the negotiating and now, having signed, the things they arranged for me, I feel loved. I feel appreciated. That's the thing you want as a player, that's really, really important.'

Wijnaldum knows what it's like to win the Champions League, something his new club never have and over which they obsess. The midfielder says he can sense a similar feeling in Paris about the Champions League as he did on Merseyside about winning the league.

And now, at last, he gets to work under Pochettino, who held talks with Wijnaldum while the was still at Newcastle.

'What makes him so good? Everybody sees it from the outside, the way he let his team play at Tottenham and also here at PSG, with attacking football, he wants to press high. He wants to do all things that the fans love to see.

'But what impressed me the most about Pochettino is the way he works with players, the way he wants to improve the player in his career. When I was at Newcastle, I went to his house and he showed me on video how he was training with players to make them better and I think that's what makes him a good coach. He's not only busy with the team but also the individual to make the individual better.

'When my agent called me and said: 'Pochettino wants to speak with you.' I was like: 'Why does he want to speak with me? I already know how he works.' But it was to tell me about the project and how he wants to do it and everything. From that moment, I was already really excited to work with him. The project is amazing so I'm happy to be a part of it.'

At some point, Wijnaldum will tell his full story. For now, he is ready just to enjoy what comes next.