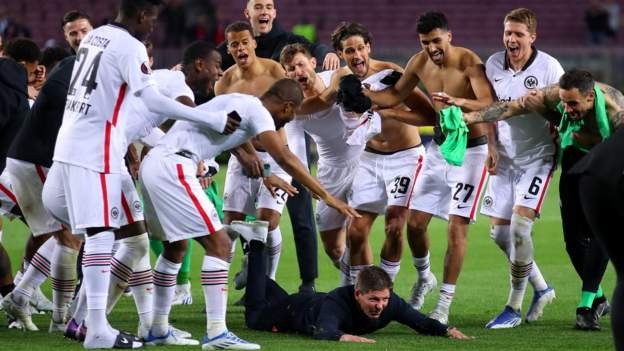 The German side take on Rangers in Wednesday's Europa League final in Seville, having not won a continental trophy since the 1980 Uefa Cup.

Though 11th in the Bundesliga, they have eliminated Real Betis, Barcelona and West Ham en route to the showpiece.

"He tries to let the team dream," said Rode of his head coach.

"He said early on we want to look from round to round, but not just be watching on 18 May - [we want to] be in Seville."

Former defender Glasner, 47, hopes his "lucky trousers" will be ready for the monumental showdown having worn them on the touchline during the last-16, quarter- and semi-final victories.

The original blue pair worn at the Nou Camp - complete with grass stains from an exuberant celebration - now hang in the club museum, with a replacement set bought before the last-four showdown with West Ham.

"My lucky trousers had to be cleaned, they're still at the dry cleaners. I hope I get them back in time," said the Austrian.

In his first season in charge of the club, Glasner can become the first Austrian coach to win a European trophy since Ernst Happel led Hamburg to the European Cup in 1983.

He worked in Austria at SV Ried and LASK before joining Wolfsburg in 2019, helping them qualify for the Europa League and then the Champions League in his two seasons there.

Yet Glasner made an inauspicious start with Frankfurt as they were dumped out in the opening round of the German Cup last August in a shock 2-0 defeat at third-division Waldhof Mannheim.

But things improved with a 2-1 victory at mighty Bayern Munich in October.

"The easiest way to deal with setbacks is to do something different," said Glasner, as he reflected on his below-par start.

"We pulled together, rolled up our sleeves and looked forward."

Winning the Europa League would make up for an unimpressive record in his first Bundesliga campaign of 10 wins, 12 draws and 12 defeats as Frankfurt finished in mid-table.

They have saved their best performances this season for Europe with Glasner encouraging his players to have the Seville final in mind right from the start.

"I prefer to stay in the background, the players are the protagonists who have to implement my pipe dreams," he said.

"I've already got a bit more wrinkles and grey hair."