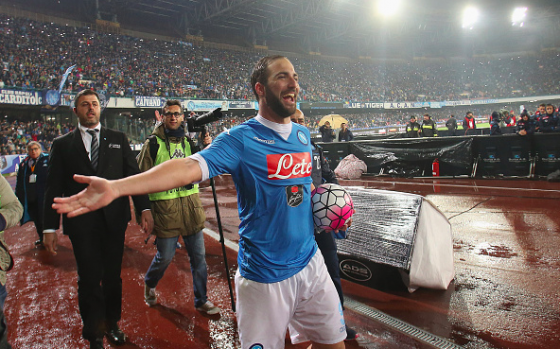 As Juventus look set to sign last season’s capocannoniere, Conor Clancy ponders whether or not the move, despite its obvious pros, makes sense given its complete cost

On Sunday, May 14, 2016, Gonzalo Higuain stood open-armed beneath the curva of the Stadio San Paolo, as his Neapolitan adorers lauded him after finishing off a record-breaking season for Napoli season by completing a hat-trick against Frosinone to bag 36 goals in 35 Serie A appearances.

Fast forward just over two months, and those same supporters now cry betrayal, as El Pipita closes in on a €94.7 million move to the only team to outperform the Partenopei last season – reigning Scudetto holders Juventus. Emotions are running high in Naples, as Higuain – who appeared to have formed a strong bond with more than Napoli, but also the city and its people – looks certain to join the one club that he really shouldn’t.

The Bianconeri have emerged victorious in each of the last five Serie A campaigns, and Higuain’s increasingly imminent arrival all but guarantees a sixth consecutive crown, one which could even be wrapped up before Massimiliano Allegri takes his side south to the San Paolo in April 2017, during round 30 of the 2016-17 season.

Higuain will undoubtedly be grateful to avoid enduring a gruelling public shaming like Cersei in Game of Thrones, however, his reception in Naples will be far from a welcomed homecoming.

In Turin, Pipa will team up with compatriot Paulo Dybala; one of the most exciting and promising strikers in world football, no less. ‘Dyguain’, as their partnership has already been christened by La Gazzetta dello Sport, is certain to tear up the Italian top flight next season.

In forming Dyguain, La Vecchia Signora will have killed off any title race before the season ever got underway. The two have never taken the field together with Argentina but appear custom made to play with one another.

The right-footed Higuain, a born predator with a sharp eye for goal, will be complemented the left-footed Dybala, who will drop deep and work the channels in search of space, likely dragging defenders all over the pitch with him.

Dybala, appropriately for his No.21 jersey with the club, could occupy the role of an advanced playmaker who also contributes goals, with Higuain to become the go-to-guy for finding the net.

“This Higuain affair is hurting me because he is going to a direct rival like Juventus,” said Napoli icon Diego Maradona last week.

Maradona will not be the only one upset by this move, as he joins a long list of supporters, from those of the Partenopei to Roma, to the Milanese clubs of Inter and AC Milan, too. No club on the peninsula will be able to cope with Juve’s newfound attacking prowess.

With Dybala joining Higuain in attack, along with Pjanic, Marko Pjaca, Dani Alves and co. assisting in providing the ammunition, Juventus’ indomitable defence will be accompanied by an unstoppable strike force as they look to add to their domestic domination with European success.

At nearly €95m, the fee expected to be paid for the striker is largely inconsequential, as it will be just a passing on of the money to be received for Paul Pogba. Nonetheless, with Mario Mandzukic and Simone Zaza already at the club, if this is the most resourceful investment of those funds is a reasonable question to ask.

In order to adequately shape up for a European push, Juventus could recruit another striker for around half of the price, and reinvest the remaining money into adding depth to their midfield, which will be weakened by Pogba’s exit.

Whether or not the 29-year-old will be the decisive factor in pushing the Bianconeri further in the Champions League remains to be seen, but Juventus could well be about to kill off the title race with no significant benefit to their Champions League chances.