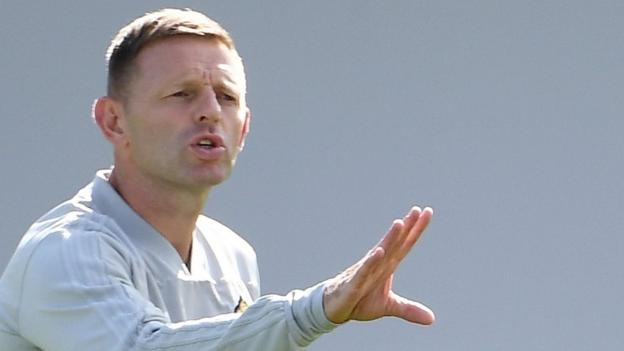 Graeme Jones (left) was part of a Belgium coaching team, along with Thierry Henry (right), that led Eden Hazard and company to the World Cup semi-finals in 2018

Jones, 48, joined Albion in August 2018 after working as Roberto Martinez's number two at Swansea, Wigan, Everton and the Belgium national side.

Luton, who are second in League One, are managerless after Nathan Jones this week left to take over at Stoke City.

"I believe Luton made an approach but he has turned it down," said Moore.

"Myself and Graeme work well together and we feel we've got a wonderful project here at West Brom. It is pleasing that he wants to stay," he told BBC Radio WM 95.6.

During his playing career, centre-forward Jones was best known for spells with Doncaster Rovers and Wigan, scoring 52 goals in 125 games for the latter.

After retiring in 2006, he became Martinez's assistant at the Swans a year later and stayed loyal to the Spaniard for more than a decade but moved to Albion after helping lead Belgium to the World Cup semi-finals last summer.