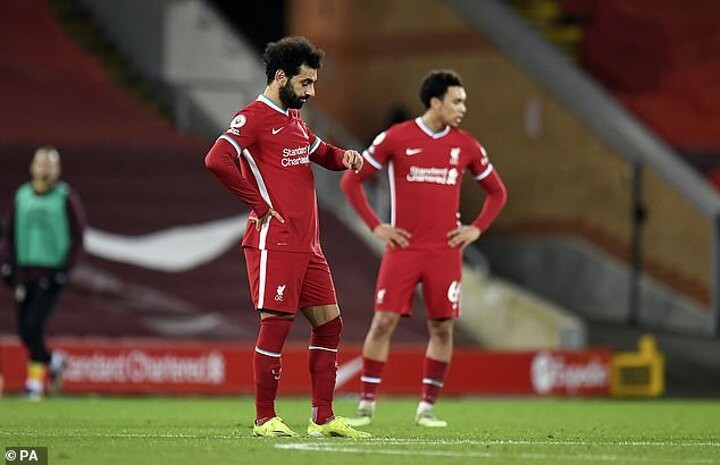 Graeme Souness claimed Jurgen Klopp's Liverpool are lacking in sparkle and not up for the defence of their Premier League title after their 1-0 loss at home to Burnley.

It means Liverpool have not scored in four straight league games and just once in their last five, which leaves them six points behind top-flight leaders Manchester United having played the same amount of games.

Souness told Sky Sports after the defeat: 'Liverpool have been a shadow of the team we've seen over the last three years. They were flat when they got the ball, every time they got into the final third the delivery was hitting the first man, if not the second man.

'They were lacking in quality from the back, all the way through (to the front). It's a disappointing night for them, Jurgen has some thinking to do. They are shot and they're 18 games in. There's no sparkle about them.

'This will be a test for them. Jurgen will find out what they've got in the dressing room. They are European champions, Premier League champions, expectation is there right on their shoulders and they've not dealt with it very well.

'That's what makes a special team - it's hard to win but to regain it and stay there, Liverpool are not up for the challenge.'

The Reds have now dropped points in six out of their last eight league matches, with four of them coming against sides stuck at the bottom of the table.

Klopp's team failed to beat West Brom, Newcastle and now Burnley since Christmas - a run of games further compounded by away draws to Fulham and Brighton earlier on in the season.

Souness claimed that signs of Liverpool's regression have existed since the start of the season, with the 7-2 defeat to Aston Villa the start of a downward curve in results.

The Sky pundit added: 'That's not a good sign either (the record against the lower sides). If you can only get yourself up for the big games you can't win the league. You win league because you're bang at it when you cross the white line.

'You have to go back to the start of the season, seven goals they conceded at Aston Villa. I'm sorry, you can't lose a game by seven.

'I look at this group of players, they've been superb, fantastic - their consistency has been off the charts, absolutely magnificent. But this is not just a slight blip, this is a real dip en masse in that dressing room.

'How you can get back on the horse and go again, I'm not so sure. This is a group of players who has a mix of youth and experience, the drop in quality is enormous.'

Liverpool now face five out of the top seven in their next six games in what looks like a very difficult patch for Klopp's side.

Their next match sees them take on Manchester United in the FA Cup fourth round at Old Trafford.