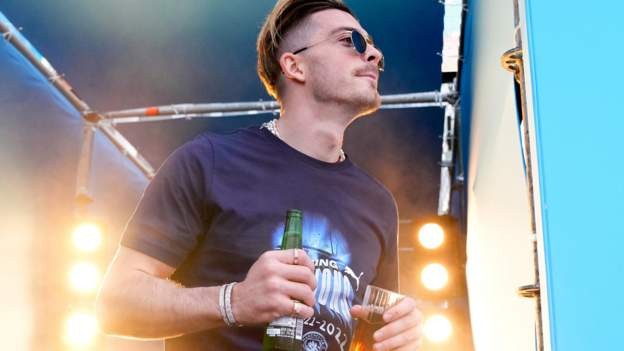 It's fair to say Jack Grealish let his hair down at the Manchester City Premier League trophy parade on Monday.

For the fans, it was a chance to get closer to their heroes and to share in the moment with them. For the players, it was an opportunity to finally relax after a gruelling campaign.

By all accounts, he was loving life.

The 26-year-old has scored six goals and provided four assists in all competitions since arriving at Etihad Stadium.

Interviewed on an open-top bus yesterday, Grealish said "it's been brilliant to win my first title".

So far, so standard.

Then he added: "The main person I want to thank is Bernardo Silva, for coming off in the 70th minute, because he was miles off it yesterday."

It's certainly true that Pep Guardiola's decision to replace Silva with Ilkay Gundogan against Grealish's old club Aston Villa on Sunday was instrumental in swinging the game and, ultimately, the title City's way.

City were 2-0 down just after Gundogan came on in the 68th minute but they soon scored three goals in five minutes - two by Gundogan himself - to end Liverpool's hopes of a stunning title win.

In another interview, Silva asked Grealish what he thought was the key to City's win against Villa. As well as again citing Guardiola's decision to bring the Portugal playmaker off, Grealish also took a swipe at another one of his team-mates.

Grealish spoke, let's say quite candidly, about his team-mates' performances on Sunday

"Riyad, take him off the pitch, as soon as possible. He played like Almiron," Grealish said.

Mahrez was replaced with Raheem Sterling, who got the assist for City's first goal.

Silva himself retorted that the manager's decision to keep Grealish on the bench was vital too.

All good fun among the City players - but Newcastle fans weren't seeing the funny side.

Grealish's disparaging comparison of Mahrez with their midfielder Miguel Almiron didn't go down well on Tyneside.

On the plus side, he did manage to get a laugh out of his boss yesterday.

Standing on-stage in front of City fans, Mahrez asked right-back Kyle Walker to name which player in world football he thought could beat him one-on-one.

After dismissing a roll call of stars including Kylian Mbappe and Neymar, Grealish grabbed the microphone and said, "me, when I was at Aston Villa, that's why Pep signed me".

It's good that he backs himself.

Among the celebrations, Grealish even made time to make a call to ex-City player Micah Richards as he appeared live on BBC 5 Live's Monday Night Club.

Well, our best wishes for him this morning. We hope that well-coiffured head of his is not feeling too sore.

Grealish certainly isn't the first to let himself go a bit on a trophy parade.

Remember when manager Jurgen Klopp almost fell off the bus during Liverpool's Champions League parade in 2019?

Or in 2011 when Real Madrid's Sergio Ramos dropped the Copa del Rey trophy and it got run over by the bus. Eek!

The trophy ended up underneath all those tonnes of metal...

Outside of football, perhaps the most memorable victory parade in English sports history was when the victorious England 2005 Ashes team turned up at number 10 Downing Street looking very, very bleary-eyed.

We await to see what content comes out of Liverpool's parade on Sunday.