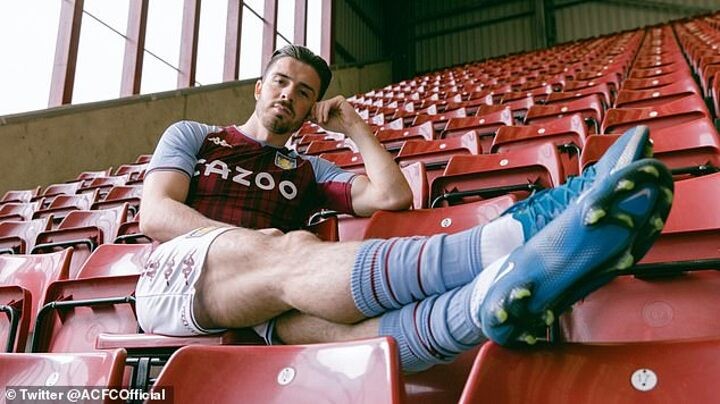 Aston Villa supporters have been given a boost heading into pre-season, with Jack Grealish hinting he could be ready to stay at the club.

The playmaker has been a starman for the Premier League side since their return to the top flight two years ago, and has since gone on to become a household name in Gareth Southgate's England squad too.

Despite rarely starting he has been seen as in integral part of England's set-up as they came within a penalty shootout of winning Euro 2020 on Sunday at Wembley.

The 25-year-old's form throughout the past two years at his boyhood club though has attracted interest from the Premier League's elite including champions Manchester City who are assessing whether to launch a £100million raid on the Villa Park favourite.

Villa appear confident of keeping hold of Grealish though, and used the midfielder as part of their promotion for the club's new home strip which they will use throughout the 2021-22 season.

As part of the kit unveiling, Grealish was keen to let it be known how attached he was to the Villa Park outfit.

'Everyone knows what claret and blue means to me,' commented the England midfielder.

'I've been a Villa boy all my life, and I love playing for this club.'

However, fans were split on Grealish's message on Twitter, although mostly were welcome of the news, claiming Villa wouldn't risk marketing their new kit with him if they were willing to sell him.

One fan said: 'No way they'd promote him this much if he's off. Never in doubt.'

Another supporter joked about the price of the kit, before admitting they were ready to purchase the new strip with Grealish's name on the reverse, saying: 'If you think I'm paying £110 to get this new top with Grealish 10 on the back after for the 3rd year running you're absolutely right!!!'

However one supporter, was more cynical of Grealish's words and was left fearing lightning striking twice, citing ex-midfielder Fabian Delph who pledged his future to Villa in 2015 before joining Manchester City just days later.

The supporter added: 'Didn't Delph do something similar?' before adding an emoji of a snake.

Villa are desperate to continue their surge up the Premier League, and are doing everything they can to keep their main man - with the club reportedly looking to agree a one-year contract extension with Grealish that would take his salary above £150,000-a-week.