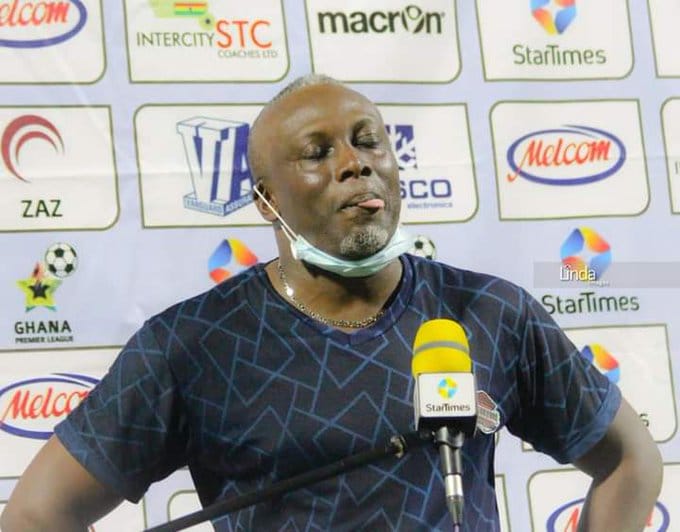 Great Olympics coach Yaw Preko was left disappointed after Asante Kotoko scored a late goal to snatch a point against them in Kumasi.

Kotoko defender Andrews Appau scored in the 10th minute of added time after 90 minutes to give the Porcupine Warriors a point at Baba Yara Stadium.

Great Olympics came into the game in poor form, having lost three consecutive games, whereas Kotoko had performed admirably, but it was the Accra side that came close to taking all three points.

Two minutes after halftime, Olympic took the lead. Olympics defended bravely, frustrating Kotoko, who threw everything at them in search of an equaliser.

Fortunately for Kotoko, their perseverance paid off in the 100th minute when Appau produced a fantastic header that went straight into the net to earn Kotoko a point and keep them in the top four.

Speaking after the game, Preko said, "We squandered opportunities. I keep saying that when you play against a team like Kotoko and Hearts of Oak. When you have to kill them, you kill them. It happened to us when we played Hearts of Oak. The last set piece of the game, Hearts of Oak equalized. Same thing. We created more than them. I said it against Hearts of Oak. It feels like a defeat.

"The game plan really worked. We controlled the game. They were not getting any chances. We were hitting them on the counter. When we had to do it medium, we did it medium. When we had to do it low, we did it low. Then we hit them on the counter. But this job is unbelievable because Kotoko doesn’t deserve a point,” He told reporters after the game.

Olympics are not in great form, with only one win in their last six games. They had previously lost three consecutive matches against Berekum Chelsea, Aduana, and Tamale. They will hope to return to winning ways on January 12 against Bibiani Gold Stars.