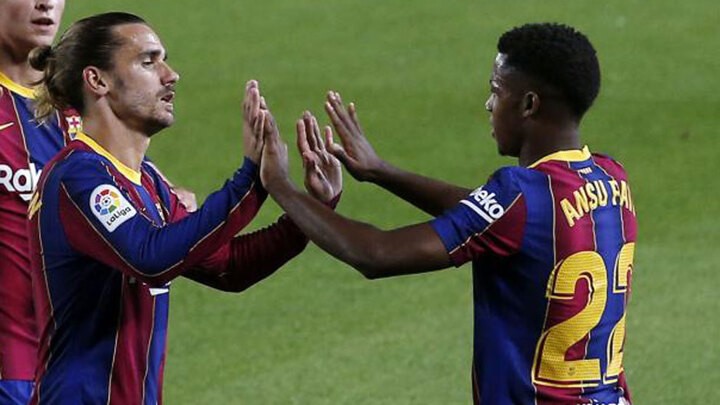 Ansu Fati scored a goal and provided an assist as the Blaugrana ran out as 5-1 winners against Ferencvaros, yet the way in which ABC journalist Salvador Sostres described the Spain international caused outrage on social media.

"Ansu running has something of a gazelle, of a very young and black street seller that you suddenly see running along Paseo de Gracia when someone shouting "Water, water" announced that the Guardia Urbana had arrived," Salvador Sostres' report in ABC read.

"Wild pictures in the heart of the city. Now this does not happen, because, for [Barcelona mayor] Ada Colau, the criminals are the police and not the street sellers, who no longer have to run away. It is also true that without tourists, business is rather weak."

Griezmann joined in with those who have been publicly criticising Salvador Sostres' paragraph, opting to emphasise that Ansu Fati deserves respect.

"Ansu is an exceptional boy who deserves respect like any human being," Griezmann tweeted. "No to racism and no to bad education."

The Frenchman's tweet had a tremendous impact on social media, and in just 40 minutes had more than 1,200 responses, almost all of them applauding his defence of the Barcelona youth product.

The paragraph in the match report had caused a great stir throughout the day, but nobody from Barcelona had come out to stand up for Ansu Fati until Griezmann came out to ask for respect for his team-mate.

Ansu Fati has started the 2020/21 season in incredible form, having scored four goals and provided two assists in five games in all competitions, while last season he played a total of 33 games, scoring eight goals and providing one assist.