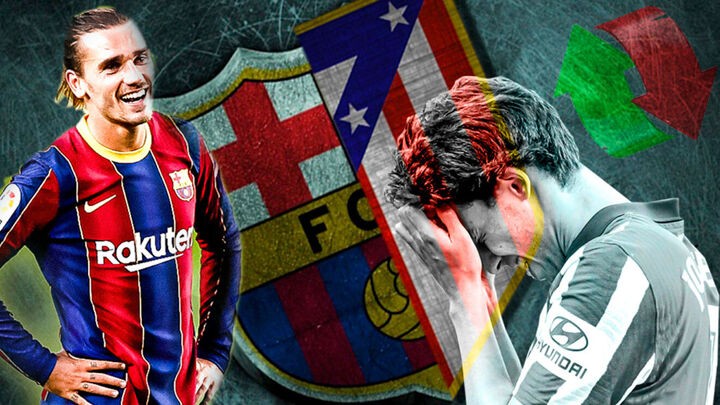 When Barcelona were preparing to visit the Estadio Wanda Metropolitano in November, Joao Felix was enjoying a run of good form, while Antoine Griezmann was struggling in Catalonia.

Five months later, there is no trace of that form the Portuguese was enjoying, with coronavirus and an ankle injury setting him back. At the Camp Nou, though, Griezmann has started to enjoy some of his best form since joining Barcelona.

The two No.7s will do battle on Saturday hoping to land a potentially critical blow in the fight for the LaLiga Santander title.

The World Cup winner arrived at the Camp Nou in the summer of 2019 with a weight of expectation on his shoulders. There was hope that he would bring a lot to the side that was then still missing Neymar, and he was supposed to offer a helping hand to Luis Suarez and Lionel Messi.

Much of the 2019/20 season was a period of adaptation for Griezmann, as has some of the current campaign, but now he is playing an important part.

Griezmann has become indisputable under Ronald Koeman, thought that hasn't always been the case with the Dutchman in charge. He's scored 18 goals this season and 12 of those have come in LaLiga Santander. As well as that, he has contributed with seven assists.

Messi himself is one of the players to have benefitted most from Griezmann's upturn in form. They've finally formed a partnership and a good understanding of each other's game, and they regularly accompany one another to lead Koeman's 3-5-2, with Ousmane Dembele being the one to miss out most often.

Griezmann has only missed two LaLiga Santander games this season - against Valencia and Sevilla - and he's now facing a big challenge of pushing on from this position.

The game against Atletico Madrid presents him with the chance to do something that he's never done before, seeking a goal against Los Rojiblancos for the first time. He has faced them 11 times in LaLiga Santander - eight with Real Sociedad and three with Barcelona - but has never scored. He did net against them in the Supercopa de Espana, though.

The Portuguese had scored five goals and three assists in seven games before the November 21 meeting at the Wanda. He looked destined to lead Los Colchoneros to a successful season, but things haven't gone to plan with him contacting the coronavirus and injuring his ankle.

Since returning, he has started just eight LaLiga Santander matches, and he has lost prominence under Diego Simeone. He's had the coach's trust in Europe, but not quite as much domestically.

He's having a hard time showing his potential in 2021, and he's a long way away from being the player that was seen in the early rounds of the season.

There have been flashes against Valencia and Cadiz, but the calendar year has largely been underwhelming.

Joao Felix now has four Matchdays ahead of him to rediscover his form and help Atletico to get their hands back on the title.