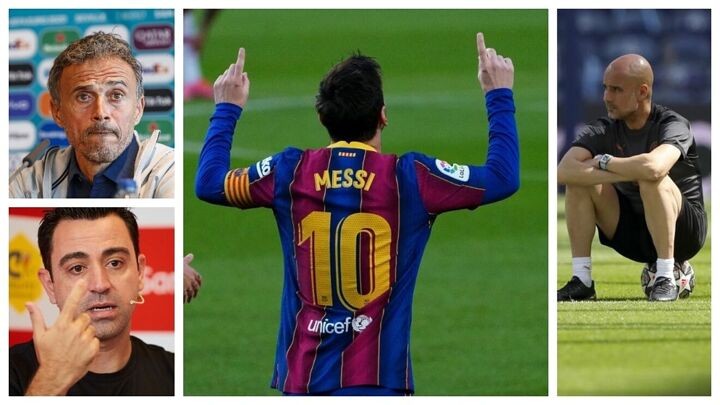 Lionel Messi has received plenty of plaudits throughout his career, and now the likes of Pep Guardiola, Luis Enrique and Xavi Hernandez have offered their thoughts on him during a documentary.

The Argentine has achieved both individual and collective success at Barcelona, shattering all records in the process, and Guardiola discussed the way in which Messi is an artist.

"Leo makes us all good. Leo's goals are not goals, they are always great goals. Is that taught? No," said Guardiola during the Messi documentary on TV3.

"There are some amazing players, but there are others who last forever and ever. On the day of [Barcelona's] 6-2 [win against Real Madrid], we hadn't trained the idea of putting him in the middle and taking him off the wing. We only talked about it beforehand, but the good ones haven't even trained it.

"[Those Barcelona players] were very good people, but on the pitch they were fu**ing killers.

"Messi is an artist, yes he is. Comparable to whom? Miquel Barcelo, Ferran Adria or Shakespeare. Why? Because they left something that moved us all."

Spain boss Luis Enrique coached Messi at Barcelona and he believes that the Argentine coming through with a player like Ronaldinho in front of him actually played to his benefit.

"Leo is a competitive machine. If at the beginning he had come up against a veteran who wasn't Ronaldinho, who had been more selfish or more of an ar**ole, he would have had more problems," Luis Enrique explained in the documentary.

"It's impossible to carry the ball so close at that speed. Losing for Messi is very hard for him. You could see it the next day, after the match. In football, Leo Messi is a genius, clearly, just like Beethoven... or Dali."

Messi has had a battle with Cristiano Ronaldo throughout his career, with the Argentine having won six Ballon d'Ors to the Portuguese's five, and Xavi believes that competition has helped the Barcelona star reach even greater heights.

"They won't say it, but one looked to see if the other scored and vice versa," Xavi noted during the documentary.

"They've been feeding each other, they're competitive animals. With the 2010 Ballon d'Or, Pep brought out the envelope with Messi's name on it and I thought: 'Justice, Leo is a better footballer than me, he's better than Andres [Iniesta], he's better than anyone.'"