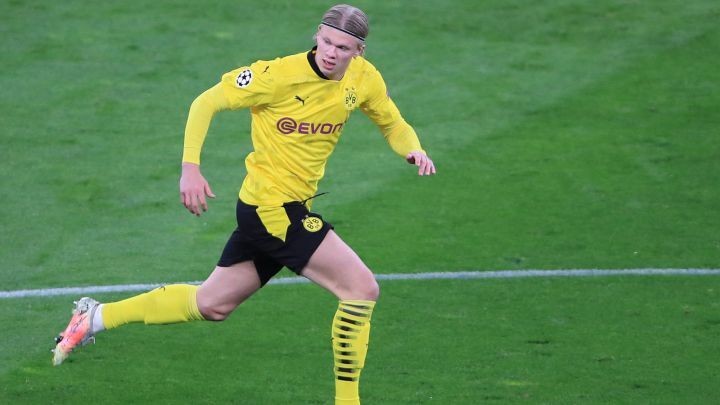 Manchester City stopped Erling Haaland from scoring as they saw off Borussia Dortmund in the Champions League but Pep Guardiola is fan of the forward.

Erling Haaland is "almost unstoppable" according to Manchester City manager Pep Guardiola, despite his side ensuring the Borussia Dortmund star endured 180 goalless minutes in their Champions League quarter-final.

City secured their passage to the semi-finals of Europe's top competition for the first time in Guardiola's five-year reign, as Riyad Mahrez's penalty and Phil Foden's 75th-minute strike saw the Premier League leaders overturn Jude Bellingham's early opener to prevail 2-1 and 4-2 on aggregate.

Much of the pre-match talk ahead of the initial encounter in Manchester centred upon Haaland, who has been heavily linked to City and a host of other European heavyweights after scoring 33 goals in all competitions this season.

The 20-year-old had a one-on-one saved by Ederson and laid on Marco Reus' equaliser at the Etihad Stadium but he endured a frustrating outing in the Signal Iduna Park return.

Haaland was restricted to a solitary blocked shot and made one key pass to create an opening for a team-mate as Ruben Dias excelled in the City defence.

Nevertheless, Guardiola felt cutting off the supply line to the forward was key.

"I would say this player is almost unstoppable and the best way to defend against these talented players is to not let them have the ball," he told a post-match news conference.

"They want the ball, they need the ball, so don't [let them] have it. For that, we need to play good and try to let him live away from our box. It happened in both games.

He is a player not [just] because he is fast, the quality of his first control, how he links with his mates, strong in the air and good finishing.

"He's a top-class player, top class, and will be stronger in the future."

Whether that future happens to be under Guardiola is a prospect that will continue to intrigue.

For now, Dortmund interim head coach Edin Terzic must pick up a youngster without a goal in seven matches for club and country.

"He is playing really well and if you saw the goal we scored he was a big part of it," he told reporters before, like Guardiola, highlighting Haaland's all-round qualities.

"It doesn't matter who scores. We are used to thinking he is the last man in the chain and has the last touch for the goal, but for the recent games he was very important for us in shielding the ball, running in behind, being a threat.

"If he works hard like he is doing all day long in training it won't take long until he's on the scoresheet again."

Dortmund host Werder Bremen in Bundesliga action at the weekend having won just twice in their past eight games in all competitions.