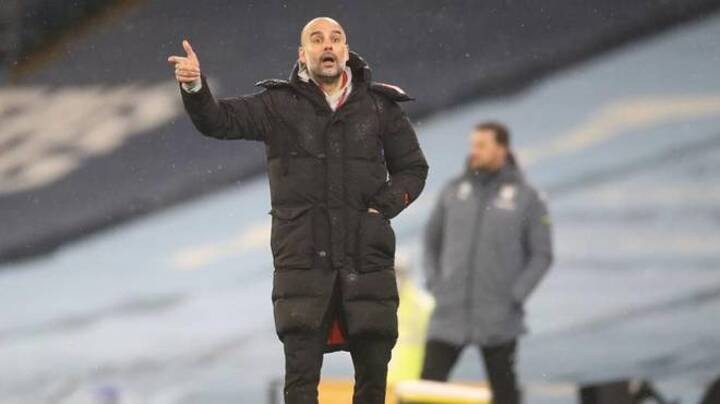 Pep Guardiola has underlined the importance of winning the Premier League for Manchester City this season, even going as far as putting the competition ahead of the Champions League.

City take on Cheltenham in the FA Cup on Saturday, and their recent run of good form has put them back in the Premier League title race as they now sit second, two points behind rivals Manchester United.

"We know the Premier League is the most important," Guardiola told the press, "and then the Champions League, but four Carabao Cup finals in a row is because every game is important.

"If we arrive without players we play with the second team. We don't drop any game."

Turning his attention back to Cheltenham, Guardiola will be without star man Kevin De Bruyne, who could be out injured for up to six weeks.

"Kevin, like the doctor said today after a scan yesterday, will be between four and six weeks out," Guardiola said. "It is [a huge blow] but we have to move forward.

"He has an important part of the season out and we have to find a solution. Everyone is struggling in the situation we are living and we have to adapt.

"When you compete in all the competitions it is important to have all the players healthy, but this is impossible.

"There are injuries at all the clubs. We knew it was going to happen, we tried to avoid it, we had more medical treatment than ever, more nutritionists than ever, we try to masseur as much as possible but they are human beings.

"This amount of competitions, at the end the bodies of the players says 'enough'.

"When we demand five subs, it's for this reason. Why can we do it [have five substitutes] in the FA Cup but the Premier League we cannot?

"The Premier League voted, but if they want to protect the players... I'm not saying because it's Kevin, it's many. More than ever.

"It's too many games, too many competitions and, in the end, the players suffer. You want to play without Kevin De Bruyne for five, six weeks? Okay, the spectators will miss an incredibly top player, like in other teams. But it is what it is."