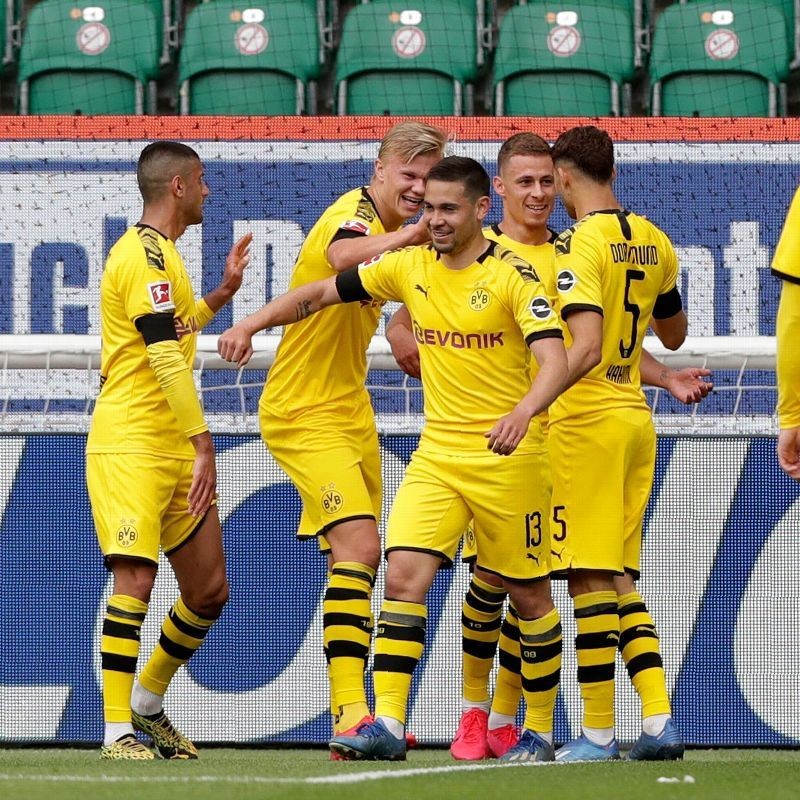 Raphael Guerreiro and Achraf Hakimi scored in each half as Borussia Dortmund closed the gap to Bayern Munich at the top of the Bundesliga to one point with a 2-0 victory at Wolfsburg on Saturday.

Dortmund secured back-to-back victories since the return of the Bundesliga amid the coronavirus pandemic.

United States youngster Giovanni Reyna also came off the bench late in the second half to make his return from injury.

Before kickoff, both teams held a minute silence for all the victims of the pandemic.

There was little quality on show for the majority of the first half until Dortmund took the lead after 32 minutes.

Dortmund enjoyed a comfortable win at Wolfsburg before their title clash against Bayern Munich next week.. Getty

The visitors produced a fine team move as Thorgan Hazard cut the ball for Guerreiro to score his third goal in two matches.

Dortmund should have doubled their lead just before the break but an unmarked Hazard missed from just outside of the area.

The hosts had a great chance to equalise early in the second half but Renato Steffen clipped his shot over the bar when through on goal.

Jadon Sancho was brought on and helped Dortmund to score a second as his assist set up Hakimi to wrap up the points with 12 minutes remaining.

Wolfsburg were reduced to 10 men moments later when Felix Klaus was shown a straight red card after VAR intervention for stepping on Manuel Akanji.

Dortmund host league leaders Bayern in the league on Tuesday in a huge match in the title race.