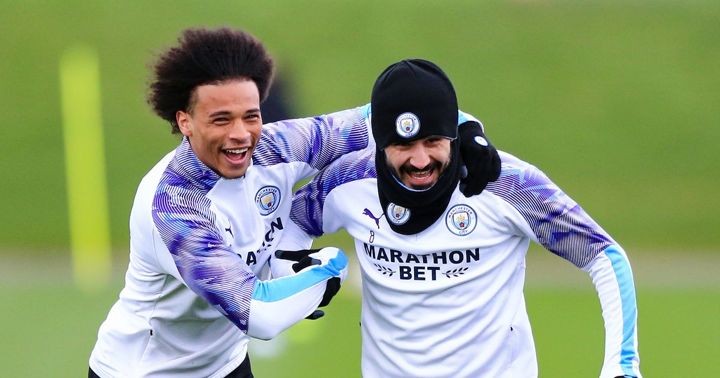 Ilkay Gundogan believes Leroy Sane can use the time during football's suspension to get himself ready to make a Manchester City return.

The winger has not featured this season since suffering cruciate ligament damage in his knee during the Community Shield win over Liverpool in August. Despite returning to training with the first team squad in January, Pep Guardiola had not used him in a first-team game before the competitions were postponed and had suggested he needed minutes with the Under-23s to work his way back.

Sane has been in regular contact during the last three weeks with his teammate for club and country Gundogan, who lives in the same building as him in Manchester and is using the same fitness trainer.

Having spoken to Sane and also taking into account his experience of coming back from serious injuries, the midfielder gave an update on how the 23-year-old is doing in what is an extraordinary situation for everyone.

"He's feeling good," he said. "It's a weird situation for him because he was quite close to return but from my experience dealing with all the injuries I had, especially the first weeks being close to being back on the pitch with the team is a difficult situation because you have different feelings in your body and your body has to get used to it again.

"With the exercises and all the training you can't be really 100 per cent ready when you're not in your rhythm. Leroy was just at that point where he still felt kind of weird not 100 per cent ready but obviously mentally he was so motivated to come back and do well.

"He's also a little bit frustrated that we have everything cancelled for the moment but on the other side you can also use the time now to work on the things he has struggled with a little bit and I see him doing good exercises in the gym so it's a weird situation for him I guess."