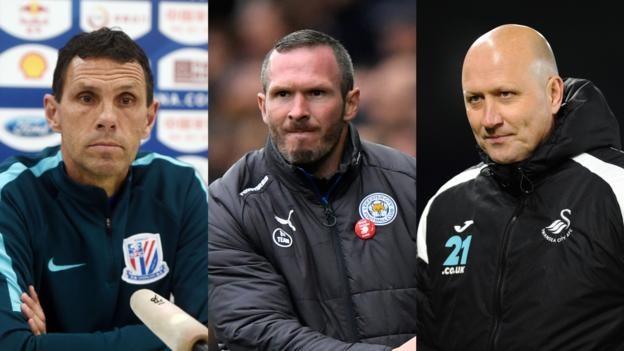 The Championship side are close to finalising a shortlist of up to six candidates to succeed Graham Potter, who left for Brighton last month.

Swansea Under-23s boss Toshack, former Leicester assistant Appleton and ex-Sunderland manager Poyet will all have second interviews with the club.

Newport boss Mike Flynn and Tranmere's Micky Mellon are out of the running.

Having spoken to more than 60 applicants, Swansea hope to complete their search for a new manager by the end of next week.

Chairman Trevor Birch has led the search for Potter's replacement, having been handed responsibility by the club's American owners Steve Kaplan and Jason Levien.

Former captain Leon Britton and ex-player and coach Alan Curtis are also assisting in the appointment.

Former Brighton and Sunderland boss Poyet has been a target of Swansea in the past and is available, having left French side Bordeaux in September 2018. He also had spells managing in Greece, China and Spain with Real Betis since leaving then-Premier League side Sunderland in March 2015.

Appleton has also been linked with the vacant West Brom job, having finished the recent campaign at the Hawthorns as assistant to caretaker manager James Shan.

Toshack, son of former Swansea, Real Madrid and Wales manager John, has been involved in the club's academy since 2013 and served as assistant to Britton during his caretaker spell in charge in December 2017.