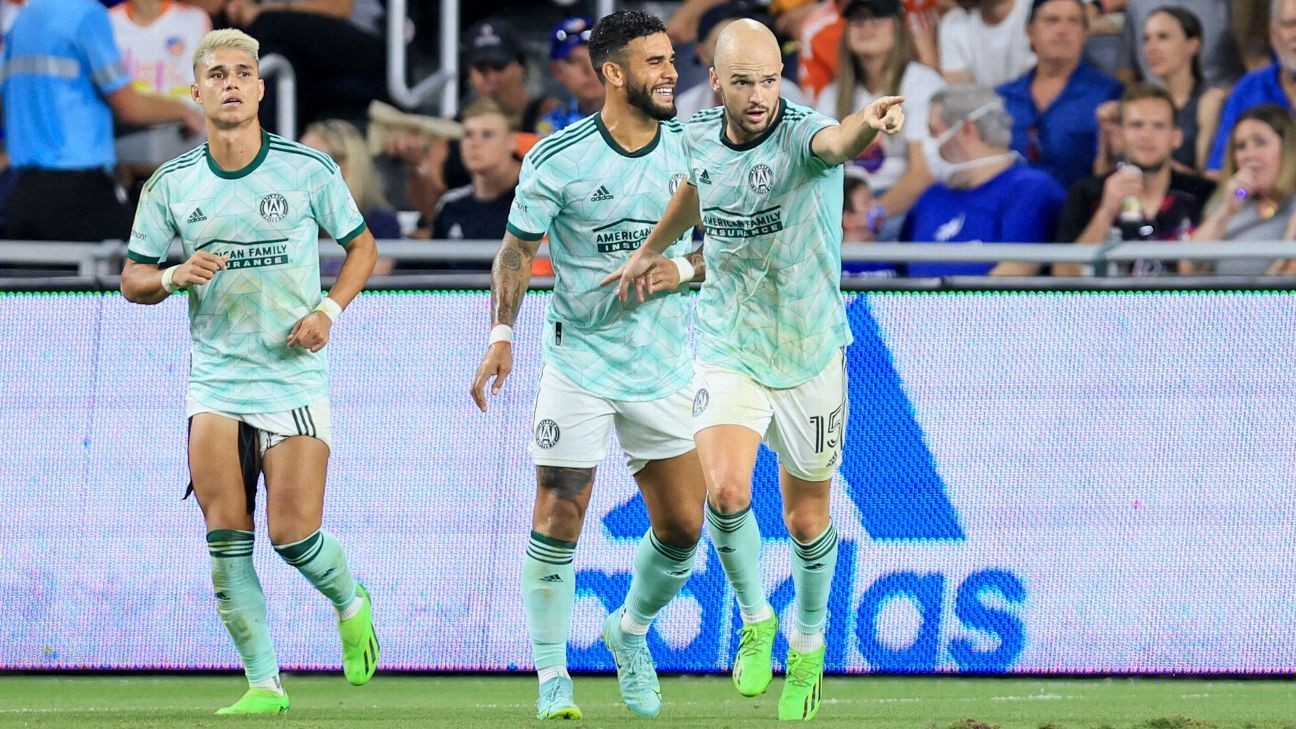 Andrew Gutman scored the 20,000th goal in Major League Soccer history in the 83rd minute as Atlanta United FC fought back for a 2-2 road draw with FC Cincinnati on Saturday night.

After scoring the 94th-minute, tiebreaking winner against Seattle last weekend, Gutman pushed home the tying goal Saturday, amid some modest net-front traffic -- and possibly offside -- to help United (7-9-8, 29 points) rally back and move to 2-1-3 in its last six MLS contests.

After Thiago Almada gave Atlanta a 1-0 lead with a 17th minute strike, FCC (8-8-9, 33 points) stormed back with two goals in 12 minutes of the first half. First, through Brandon Vazquez's 15th of the season on 29 minutes, then Brenner's ninth in the 41st.

Vazquez became the first Cincinnati player to score in four straight matches. Meanwhile, Brenner has four goals in three games for FCC, which finds itself amid a 1-1-7 stretch.

Andrew Gutman celebrates after grabbing a late equalizer for Atlanta United against FC Cincinnati and scoring the 20,000th goal in the history of MLS. Aaron Doster-USA TODAY Sports

Atlanta wasted no time pressuring the Cincinnati goal and goalkeeper Roman Celentano (four saves). Luiz Araujo and Ronald Hernandez each took quality shots from inside the box within the first five minutes. Then, Almada's strike hit the left post, and another Hernandez ball was saved at the right, bottom corner of the net by Celentano.

FCC's first serious threat came through Brenner in the 16th minute. However, 20-year-old Atlanta keeper Rocco Rios Novo (six saves), who made some key saves late in the match, got a diving hand on the ball.

Atlanta eventually opened the scoring through Almada, who hooked the ball in from just outside the top of the box, off a perfect pass from Araujo. However, five minutes after United's Marcelino Moreno hit woodwork in the 24th, Vazquez achieved his milestone goal with a casual strike into the bottom right corner to equalize.

Then right before half, Brenner was credited with putting FCC ahead amid some in-box commotion and poor United defending of the home side's set piece. It ended with the ball eventually crossing the line after bouncing off Atlanta's Juan Jose Sanchez Purata.