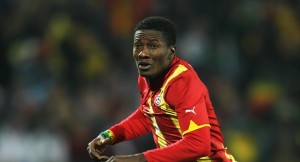 Katlego Mphela's 41st strike divided the two sides at the Soccer City Stadium in Johannesburg and gave the Bafana Bafana a morale boosting win for the start of the 2012 Nations Cup qualfiers.

Gyan, who captained the Ghana side, claims his side's slow pace to the start of the match cost them the defeat and praised the Bafana Bafana for their winning mentality.

"I think we started the game very slow and the South Africans took control of the game in the first-half," the 24-year-old said after the match.

"We went back (at the break) and we changed our type of play and we came back into the game, so you could see it was a balanced game in the second-half.

"They did very well in the first-half and I congratulate them on the victory."