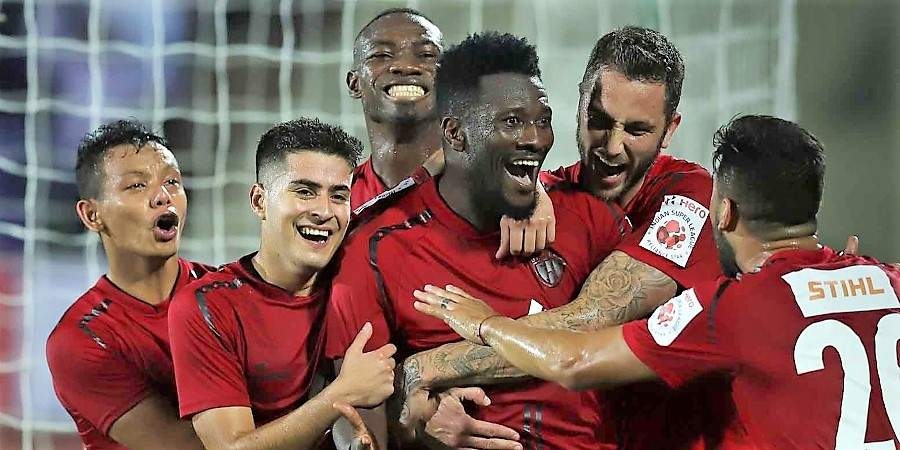 Asamoah Gyan's NorthEast United teammate Panagiotis Triadis has described the Ghanaian superstar as the most entertaining player he ever shared a room with.

The Greek midfielder revealed Gyan brought some fun and excitment to the club, despite his high profile name and achievement in football.

According Triadis the former Sunderland player was like a friend next door who loved to party.

"To be honest if you could compare Asamoah and Obetse, they are the complete opposite," he said when asked to share his experience with Asamoah Gyan as a roommate on Let's Football Live. "Obetse is very very serious, very very focused and takes this ship role and Asamoah is more like just your best friend from next door," he added.

"You can't feel like this is Asamoah Gyan, he is one of the top scorers in the whole world cup, like this man has played everywhere, this man has made millions in football.

"He is not that guy at all, he is literally a friend to everyone, to the young guys, young Indian boys that came to the first team, to the top players. He was very lovable, very very funny guy and when his opinion, should have been heard, he was there to speak."

Panagiotis Triadis also revealed his relationship with the Ghanaian was excellent, developing a chemistry that saw the two of them gel well in games for NorthEast United in the ISL.

"Speaking for myself as well I had a great relationship with him, we are still friends, we spoke yesterday and I think on the court we also had great chemistry. Too bad the season had to end so early."

Gyan scored four goals in eight appearances for the club before injuries ended his season. The Super League was also halted following the outbreak of COVID-19.