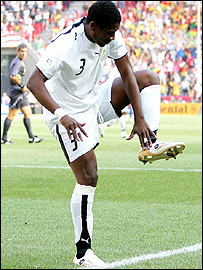 Ghana received a massive boost on Friday when duo Asamoah Gyan and Richard Kingson joined the Black Stars ahead of their 2012 African Cup of Nations qualifier against Swaziland.

The pair joined the squad in their camping base in Johannesburg ahead of their departure for Mbabane for the Group I game on Sunday.

The two playersâ€™ arrival for camping was delayed because they were sealing deals with their new English clubs.

The presence of the two key players is a massive boost for the Black Stars as they seek to hit the ground running in the qualifiers.

They were expected to join the team on Thursday but work permit application in France and England for Gyan and Kingson respectively delayed their arrival.

Gyan had to travel to his base in France to apply for a UK work permit after sealing a deal with English Premier League side Sunderland.

Kingson was also making a new work permit application after he was released by Wigan before newly-promoted Blackpool signed him.

The Black Stars will leave their training base on Friday and are expected to arrive in Mbabane later on Friday.