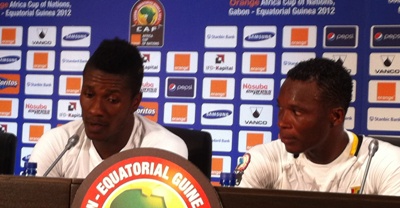 Ghana striker Asamoah Gyan is envisaging another difficult game against Tunisia at the quarter finals of the 2012 Africa Cup of Nations.

The Black Star drew 1-1 in their final Group D game against Guinea which saw them through as group winners to set up the tie with the 2004 winners.

The Ghanaians who were coming from the back of an impressive 2-0 win over Mali in their second group game failed to live up to expectations against the Syli Nationale.

And Gyan who admits he played against the stiffer side so far in the competition against Guinea believes Tunisia will be a much tougher side to beat.

â€œIt is another difficult match for us,â€ Gyan said.

â€œThe Tunisians are one of the best in the tournament although they lost to Gabon.

â€œWe have seen them play and for me they are favourites for this competition so we really have to be on top of our game in order to beat them.â€

Ghana who aim to end a 30-year wait for an African title have looked very inconsistent in their performance, casting doubts over whether they really are title contenders.

The Black Stars will play their quarter final match on Sunday evening against the Carthage Eagles who hosted and won the CAN in 2004.