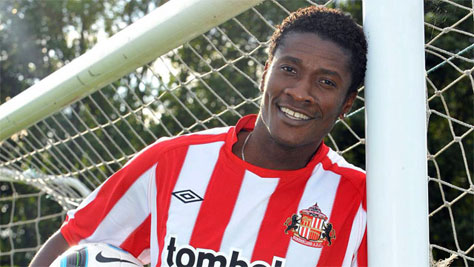 Record signing Gyan is hoping to usurp his Mensah as one of the chief jokers in the Sunderland dressing room.

This comes a day after the forward completed a record move to the Premier League side for just over Â£13m.

The 24-year-old is certainly a character, as shown when he bounded into the media room at the Academy of Light for this exclusive interview.

See video of Gyan arrival at Sunderland and Bruce's thoughts below

As part of his first chat as a Sunderland player, Gyan revealed he can't wait to be reunited with international team-mate John Mensah.

The pair have played together for a number of years for Ghana and were team-mates for a matter of ten days at Rennes.

And they already have a great relationship with Gyan pledging to unleash some practical jokes on Mensah, who he describes as a "great man".

"Quite unfortunately, when I joined Rennes he left only ten days later to sign for Lyon," Gyan said.

"I have already met him here and I have played with him in the national team for over seven years.

"He is like a big brother to me and is always advising me. He is a great guy off the field as well as on it.

"We joke together a lot when we are in the national team. The atmosphere here is very important to me."