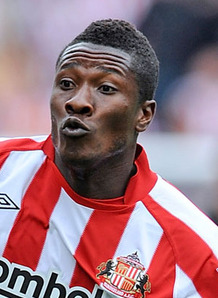 Sunderland striker Asamoah Gyan credits Didier Drogba for helping him to ignore an initial setback to receiving a lucrative deal to play in the Premier League.

If Asamoah Gyan somehow helps Sunderland beat Chelsea then the champions will only have their own talisman, Didier Drogba, to blame.

Drogba is not only Gyan's role model but also became something of a mentor for the Ghanaian following a personal crisis.

Gyan only emulated Drogba's leap from French football to the English Premier League having been counselled by the Ivory Coast international following a traumatic African Cup of Nations two years ago.

"I will always have a debt to Drogba," Gyan said.

"In 2008 I was hugely criticised for my performances in the African Cup of Nations, and I almost walked away from the national team with my brother (Baffour)

"But we beat the Ivory Coast in the third-place game and at the end Drogba called me over and advised me and told me I should carry on and work hard to get to the top.

"I remember what he told me, and I thought that I should just keep going. Drogba told me he had seen what was in the newspapers but that I shouldn't give up.

"He had seen me play in Italy and France and he knows I have the quality. I went on to be one of the players of the World Cup with Ghana this year, so everything can change in the twinkle of an eye. I followed his advice and so far things seem to be working well."

Gyan, 24, will hope to make Drogba regret his show of support when he comes face to face with one of his football heroes at Stamford Bridge.

"Drogba especially has been my inspiration, an idol for me," he added.

"I watch him and think to myself that I want to be like him. It is hard to become a star, but it is even harder to maintain it and that is what he has done.

"Didier is a big guy, far bigger than me. I cannot be exactly like Drogba. I have different qualities. But I want to follow in his footsteps.

"Drogba has made all Africans proud so I want to be like him in that respect. I want to be up there with the best African players."

Both Drogba and Gyan are on the Ballon d'Or shortlist to become world player of the year even though the latter's chief claim to fame is missing a last-gasp penalty in a World Cup quarter-final.

"Any time I go out, people recognise me for it and say 'he's the guy who missed the penalty' but they don't say that I scored in the shoot-out. That's normal, though," Gyan said.

"Any time I am alone, I think about it and curse my unlucky stars because that penalty would have put Ghana into the World Cup semi-finals for the first time and it didn't happen.

"I wish it had, but you have to move on and I am okay about it now. It doesn't prey on my mind. I'm mentally strong.

"When I missed the penalty against Uruguay, of course I was disappointed but I told myself I had to keep on going and that's what I did. After I scored in the shoot-out [which Ghana lost], everything in my mind was okay."

Gyan, who becameÂ Sunderland's club-record signing when he made a Â£13 million switch from Rennes following the World Cup, is ready to resume spot-kick duties, having seen colleague Steed Malbranque miss a penalty last weekend in the 2-0 defeat of Stoke.

"I got the ball and wanted to take it but Steed insisted," Gyan said.

"I didn't want to create a scene. I had already scored while Steed has been incredible this season and needed a goal. That's why I gave him the ball. The manager really complained after the game and asked me why I didn't take it.

"I explained everything but he told me that next time we have a penalty, and Darren Bent is not playing, I should take it. It's my responsibility now."