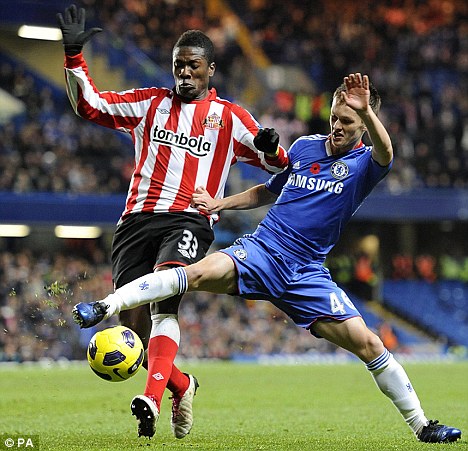 Ghanaian striker Asamoah Gyan will not be in action for Sunderland on Monday when Everton visit the Stadium of Light in a Premier League game, Ghanasoccernet.com can exclusively reveal.

A thigh injury he suffered while training with the Premier League side on Saturday has ruled him out of the game.

Gyan, who is celebrating his 25th birthday on Monday, was hoping to continue with his impressive scoring run in the league.

But doctors of his English side Sunderland have asked him to stay out of action to help him recuperate.

â€œI suffered a knock on my thigh during training some few days ago so I will not play in tonightâ€™s game,â€ Gyan told Ghanasoccernet.com.

Sunderland manager can rely on Darren Bent to score as he has fully recovered from injury.

England international Bent is fit after being sidelined since October with a hamstring injury and is desperate to add to his six Premier League goals for the season.

Gyan stepped up to the plate in Bent's absence with four in his last three games.