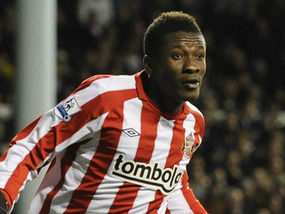 Ghana striker Asamoah Gyan says the sky is the limit for Sunderland after bursting Chelseaâ€™s bubble.

Sunderland have bounced back superbly since their 5-1 derby drubbing at Newcastle 16 days ago, picking up seven points from a possible nine, including Sundayâ€™s shock win over the Blues.

And Ghana striker Gyan says Steve Bruce's men should now fear no one.

"We have proved to everyone that anything is possible," he said. "We can do it â€“ we proved that at Chelsea.

"We worked hard every time we got the ball. We were not scared. We must believe in ourselves because with the players we have we should have confidence in ourselves that we can go places."

Gyan looked a constant threat alongside Danny Welbeck, who scored his first goal for the club since his summer loan move from Manchester United.

Gyan, who was one of the stars of the World Cup, has capitalized on first-choice striker Darren Bentâ€™s hamstring injury.