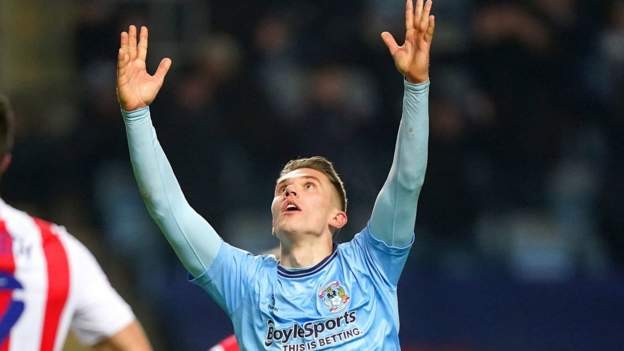 Coventry City closed the gap to the Championship play-off places with a deserved win over a below-par Stoke City at the Coventry Building Society Arena.

Viktor Gyokeres hit the winner midway through the second half, looping a 20-yard shot into the bottom corner as the hosts took advantage of sloppy defending from the visitors.

Potters goalkeeper Jack Bonham denied Gyokeres three times in the first half, including a point-blank stop just before the break.

Coventry almost added a second when substitute Martyn Waghorn drove a long-range shot past the post, but they comfortably saw out late Stoke pressure.

Both sides went into the match within range of the play-off places, but without form, with Coventry managing only a second win in nine league matches and Stoke suffering a fourth defeat in five in the Championship.

The Potters had conceded only once in their five previous away trips, but had Bonham, and a wasteful attack, to thank for not falling to a heavier defeat.

As well as a hat-trick of saves from Sweden forward Gyokeres, the Stoke keeper also had to be alert to tip over Gustavo Hamer's corner as Coventry gradually upped the pressure in a goalless first half.

The momentum remained with the hosts after the break as Josh Eccles headed Hamer's corner just wide, and it finally took a mistake from the visitors to give Mark Robins' side the winner.

Trying to play out from the back, the visitors gave the ball away to Ben Sheaf who slid in Gyokeres to end a goal drought that had stretched back to early October.

O'Hare also fired a late chance wide, but Coventry easily held on to move up to ninth, four points off the play-off spots, while Stoke drop to 11th.

Martyn Waghorn (Coventry City) wins a free kick in the attacking half.

Dominic Hyam (Coventry City) wins a free kick in the defensive half.

Attempt missed. Callum O'Hare (Coventry City) right footed shot from the centre of the box is close, but misses to the left.

Attempt blocked. Viktor Gyökeres (Coventry City) right footed shot from the left side of the box is blocked.

Attempt missed. Viktor Gyökeres (Coventry City) header from the centre of the box is high and wide to the left. Assisted by Jamie Allen with a cross.

Phil Jagielka (Stoke City) is shown the yellow card for a bad foul.

Attempt missed. Jaden Philogene-Bidace (Stoke City) right footed shot from outside the box is high and wide to the right. Assisted by Josh Tymon.