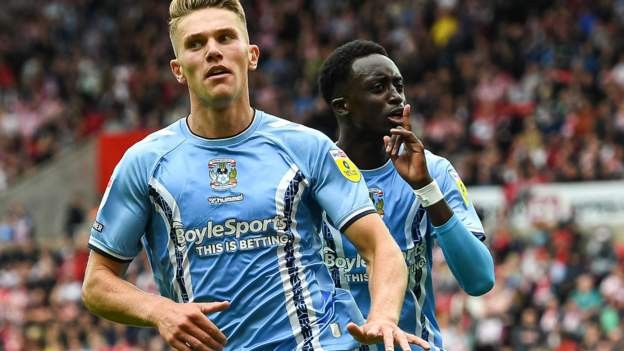 The Black Cats took an early lead when Jack Clarke headed home Lynden Gooch's deep delivery at the back post.

The away side grew into the match and Jonathan Panzo's ferocious 30-yard strike was brilliantly turned on to the crossbar by Sunderland goalkeeper Anthony Patterson before Matt Godden fired an excellent chance wide after the break.

Coventry continued to press though and were ultimately rewarded when Gyokeres picked the ball up centrally 25 yards out, came on to his right foot and smashed a wicked strike into the bottom corner.

Sky Blues boss Mark Robins was marking his 300th game in charge of the club and he will have been pleased with how his side came back at a raucous Stadium of Light.

Clarke, who joined permanently from Tottenham in the summer after a successful loan spell last season, headed in with Coventry goalkeeper Simon Moore stranded after making the decision to come for Gooch's deep cross and missing it.

The home side could not build on that early goal though and only Patterson's fingertip save from debutant Panzo's long range shot kept them in the lead at the break.

Godden should have levelled when Dan Neil was caught in possession 25 yards from his own goal but swept his shot wide of the post before Ross Stewart saw a decent effort saved by Moore at the other end.

Gyokeres, who scored 17 league goals in 2021-22, got off the mark for this campaign with a fine driven strike as the Sky Blues made their pressure tell with just over five minutes to play.

Alex Neil's men next face a trip to Bristol City on Saturday, while Coventry host Rotherham on Sunday.

Luke O'Nien (Sunderland) is shown the yellow card for a bad foul.

Viktor Gyökeres (Coventry City) wins a free kick in the defensive half.

Patrick Roberts (Sunderland) wins a free kick in the attacking half.

Jack Clarke (Sunderland) wins a free kick in the defensive half.