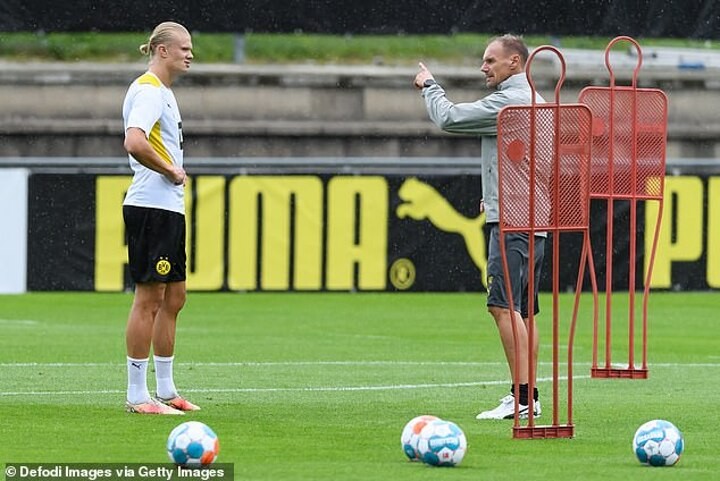 Borussia Dortmund star Erling Haaland has quashed talk of a move to Chelsea this summer, insisting he is happy in Germany with three years remaining on his deal.

Haaland has been heavily linked with a move to the European champions this summer after another exquisite season, in which he scored 41 goals in as many games.

The Blues' interest in Haaland dates back to as early as March, when Sportsmail reported they were one of three teams - alongside Real Madrid and Manchester City - interested in signing the forward.

Haaland, who is currently in the midst of a training camp in Switzerland in preparation for the 2021/22 campaign, has revealed contact with his agent Mino Raiola has been minimal, however.

'Before yesterday I haven't spoken with my agent for one month,' Haaland told Sportbild when discussing the links to Chelsea.

'So you have the answer. I hope it's only rumors because it's a lot of money for a person.'

The forward is under contract until 2024 and insisted he remains happy to stay with Dortmund, particularly after winning his first piece of silverware with the club last season as they claimed the DFB-Pokal.

'I have three years left on my contract,' he said. 'I'm enjoying my time here.

'But of course the trophy was important because that's what I want.'

Dortmund have already lost a key member of their squad this summer in Jadon Sancho, who last week completed his long-awaited £73million move to Manchester United.

However, they have remained adamant that Haaland will not follow suit.

Kehl said: 'There is nothing new on this matter. He is in our plans. Erling will return this week and he will be very hungry.

'He wants to play football, he feels comfortable with us and he will be eager to score many goals.'

Chelsea are in need of attacking reinforcements this summer, with Olivier Giroud already heading to AC Milan and Tammy Abraham likely to leave having fallen down the pecking order under Thomas Tuchel.

Sky Sports Germany earlier in July claimed Dortmund had rejected an opening cash-plus-player offer from Chelsea, following reports that Abramovich was freeing up £150million to complete the signing.