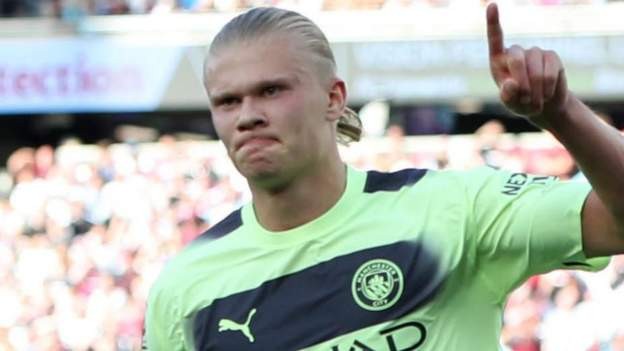 Manchester City's rivals clutched desperately at a collection of straws when Erling Haaland delivered a low-key performance in the Community Shield defeat against Liverpool.

They hoped his stellar record in the Bundesliga with Borussia Dortmund might disguise a flat-track bully who would take time to adapt to the Premier League and could even disrupt City's studied cerebral style with his more explosive, physical approach and brute force.

It was the sort of instant, hopelessly flawed rush to judgement that had the Premier League's other big new attacking arrival, Liverpool's Darwen Nunez, lampooned as Andy Carroll reincarnate after just a few minutes of his first friendly.

That Haaland is as much of a guarantee of goals - lots of them - as Manchester City could have got and everything they hoped for when they secured the services of one of the game's most coveted talents, was on show for all to see in this cruise of a 2-0 opening weekend win at West Ham United.

When he was replaced by Julian Alvarez 12 minutes from time, Haaland had not only won the game for City with two goals but started to hone his partnership with the line of supply that will surely bring him a glut this season.

Haaland spent the first half hour getting his eye in, making lots of runs that were not quite picked out either by passes from Kevin de Bruyne and Ilkay Gundogan, or narrowly missing out on an inviting cross from Phil Foden.

All that changed after 36 minutes when Haaland's diagonal run was picked out by Gundogan. He was too quick for West Ham keeper Alphonse Areola, on for the injured Lukasz Fabianski, who brought him down.

City's record from the spot is notoriously chequered but Haaland was having none of that as he picked up the ball and sent Areola the wrong way before adopting his trademark Zen pose to receive the congratulation of his team-mates.

The biggest window into what we can expect from City this season came after 65 minutes with a goal we will see replicated often in an ominous warning to those hoping to take away their Premier League crown.

De Bruyne advanced before spotting another Haaland run. The pass was perfection, as was Haaland's finish, striding on to beat Areola with a low, left-foot strike. It was unerring and carried the hallmark of all the great strikers - namely you never expected him to miss for the moment he escaped the West Ham defence.

Game over. It will be game over for a lot of teams in the Premier League once City perfect those lines of communication between Haaland and those who will be watching for those runs in behind defences.

The ease with which City simply dismissed a West Ham team who many had predicted would give them the sternest of opening game tests, was a very early, very eloquent, statement of intent.

Not only did City use all the old armoury to unpick West Ham, they were able to utilise a devastating new attacking weapon to send a message to the rest of the Premier League.

De Bruyne, Gundogan and Foden will regard the prospect of feeding Haaland a mouth-watering one. The feeling will be mutual.

City have won the Premier League in four of the past five seasons but there has always been a nagging feeling they should take a higher percentage of the chances they create.

It may not have cost them domestically but it has not helped their pursuit of that elusive Champions League, with the semi-final against eventual winners Real Madrid last season the prime example.

It is hard to shake the belief that if they had a finisher of Haaland's hunger and ability available then, they would have had that tie won after the first leg.

Now they have Haaland and those hoping this big name new arrival, with a more traditional striking approach than others Guardiola has had before, might somehow change their dynamic to City's detriment will have to think again.

West Ham, so surprisingly passive and limited, simply could not cope with Haaland's power and the chances City's brilliant creators offered up to him.

Haaland's all-round display suggest they will not be the last to be left floundering as the champions made the smoothest of starts to their title defence.