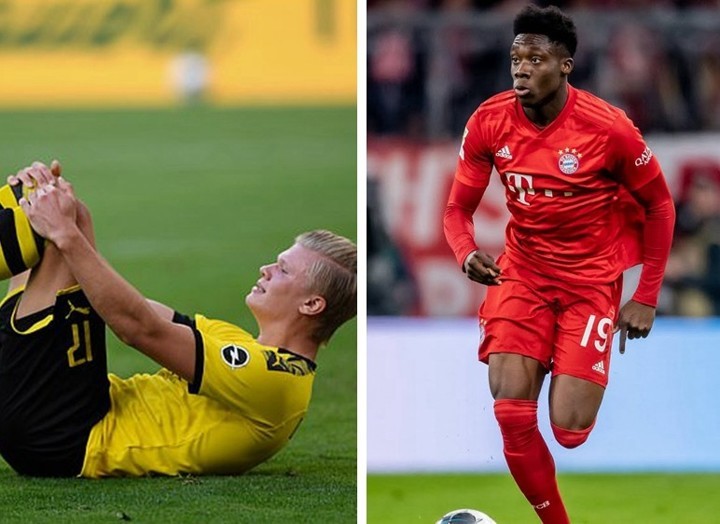 An exquisite chip from Joshua Kimmich all but sealed an eighth Bundesliga title for Bayern Munich on Tuesday evening after Hansi Flick's men raced seven points clear at the top of the Bundesliga table.

While Borussia Dortmund showed glimpses of quality against their old rivals, it just wasn't their day – especially when their biggest stars failed to turn up.

But aside from the result, what else should be taken from Der Klassiker? Here are five things we learned from Borussia Dortmund's Bundesliga clash with Bayern Munich.

With the eyes of the football world glued to this game, English football fans will have been left disappointed by Jadon Sancho's display in the second half.

Clearly struggling with fitness issues, Lucien Favre decided to give the Brit just 45 minutes of Dortmund's biggest game this season.

But in a whole half of football, Sancho struggled to make a real impact on the game, while showing a lack of experience against the most dominant side in Bundesliga's recent history.

Fans on social media noticed his lack of match fitness, too, with one Twitter user even going as far to label the 20-year-old as 'unprofessional'.

They wrote: 'Sancho is unprofessional. How can he lose fitness within two months when others have kept on top of theirs. That's what Ole wants?'

Tuesday saw Sancho make his third straight cameo appearance from the substitutes' bench having struggled with a calf issue before the Bundesliga made its grand return. However, if the £100million-rated winger was fully fit it would've been a different story, according to Owen Hargreaves.

The 39-year-old told BT Sport: 'Jadon coming off the bench in three straight games, if he's fit, which he must be because he was on the bench, they're going to have to start him.

'You can see what he can do, he can decide a game in the blink of an eye. A couple lovely touches came from Sancho, he would have made such a difference if he had started the game.

'I know Dortmund were in a good run of form coming into this but you need your best ones to play and he's definitely one of their best. Jadon was smart to play near Achraf Hakimi who is an outstanding full-back, the pair of them are devastating when they get going.'

Alphonso Davies, who made his senior debut for Bayern earlier this season, is already looking like a world-beater and his performance against Dortmund saw him stand out above the rest.

The 19-year-old showed bundles of energy marauding up and down the left-hand side for the German champions, while he denied Erling Haaland a goal with a last-ditch recovering challenge during the first half.

With pace to burn, the Ghana-born winger was described as a 'cheat code' by Inter Milan striker Romelu Lukaku, while Thomas Muller hilariously compared him to the Looney Tunes character 'Road Runner' in his post-match interview.

Muller said: 'Alphonso is a player with a lot of heart and a lot of power. Extreme power.

'Sometimes he's not in the best position on the field but he's gets to the opponent when they think "oh, I have time!" and then, meep, meep, meep, meep, the Road Runner comes and steals the ball.'

On a day where the attention was solely on the young guns, it cannot be forgotten just how pivotal the roles Mats Hummels and Jerome Boateng played in keeping this a low-scoring affair.

The veteran duo showed experience in the big moments and defended impeccably throughout, while the only goal of the game should've arguably been saved by Dortmund goalkeeper Roman Burki.

What makes Hummels' performance that even more impressive was that he picked up a yellow card after 13 minutes which meant he wasn't able to put a foot wrong for the rest of the contest.

The German defender made a vital deflection to tip Robert Lewandowski's late effort onto the post, giving Dortmund some hope before the final whistle.

At the other end, Boateng was tasked with the tough assignment of keeping Haaland, Julian Brandt, Sancho and Thorgan Hazard quiet, something he succeeded in doing as Manuel Neuer and his backline kept a precious clean sheet at Signal Iduna Park.

One blip in Boateng's performance involved a penalty shout for the hosts. The controversial moment came when Boateng lost his footing inside the box when anticipating a shot from Haaland.

While on the ground and with his back turned, Boateng managed to block Haaland's shot by using his arm, sending the ball out for a corner.

There were barely any protests from the hosts and Bayern got away with one. While it remains one of the big talking points from the game, it doesn't take away from Boateng's superb efforts in the heart of Bayern's defence.

One of the battles being drummed up before Tuesday's clash was the comparison of each team's prolific goalscorer: Haaland vs Lewandowski.

Both have been on fire in the Bundesliga this season, with Lewandowski leading the goalscoring charts with a staggering 27 goals from 28 games while Haaland has hit the ground running since his move from RB Salzburg in January, scoring 10 goals in as many games coming into Der Klassiker.

Haaland's minutes per goal ratio was also superior to the Polish striker's, as the two were pitted against each other in the Bundesliga's biggest game of the season.

But for Haaland, nothing fell for him. The Norwegian starlet was isolated and often lacked the service up front. When he did have the opportunities to score, his efforts were either blocked or he squandered the opportunity.

It would be totally unfair and unjustified to write him off after the game but it showed that he still lacks the vital experience and maturity to win an encounter of this calibre.

The 19-year-old's day ended on a damp note when he limped off with an injury, which effectively ended Dortmund's chances of getting back into the game.

Bayern boss Hansi Flick said on Tuesday before the game that Haaland should not be compared to Lewandowski. While the comparisons are understandable, it's warranted that the youngster certainly needs a lot more time in the Bundesliga before he can sit with the likes of Lewandowski.

Another Der Klassiker, another win for Bayern Munich.

Well on their way to winning an eighth consecutive Bundesliga title, their rivalry with Dortmund has been fairly lop-sided in their favour during their dominant run in the league.

In the time they've racked up seven consecutive titles, Bayern have played Dortmund 16 times in the league and lost three. Another three games have been drawn, making it 10 wins for Munich in their league meetings since 2012-13.

While the absence of Dortmund's famous support may have played a part in the result, it doesn't change the fact how dominant Bayern have been in this fixture in recent years.

While it wasn't their finest performance to date, it shows that Bayern are still the league's top dogs and are certain favourites to win yet another league title.