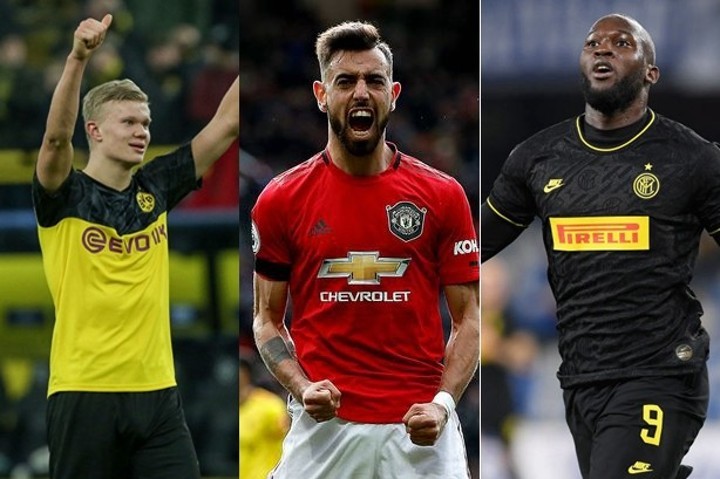 Football transfer market has been really crazy in recent years, prices of football players have been incredibly high compared to those at the begin of the 2010s. Also, it goes commen when you see some clubs spend money like water just to see their promising signings turn out to be proved as flops.

But, there always are smart and professional agents and directors from those famous clubs who really make the grade in transfer market. And there always are hard-working and intelligent footballers who live up to their prices as well as the expectations from their clubs and fans. Here, Goal.com have a review of the transfer deals made in 2019/20, and select 15 best deals this season.

When Arsenal signed Martinelli for £6 million ($8m) from Brazilian club Ituano in the summer, not much was expected immediately from the talented striker.

But the 18-year-old has impressed straight away, scoring 10 goals in all competitons to establish himself as a star of the future.

It has been revealed recently that Martinelli spent four trials at Manchester United but it was ultimately Arsenal who swooped in to make a deal.

Wan-Bissaka has settled in to become a crucial cog of Manchester United’s defence despite his hefty price tag.

The right-back joined the Red Devils from Crystal Palace in a deal worth £50m ($63m).

His 99 tackles ranks second in the English top flight and his most impressive performances have both come against Raheem Sterling in Man Utd’s league victories over Man City.

Fekir made a surprise move from Lyon to Real Betis only 12 months after a dream transfer to Liverpool fell through because of a failed medical.

The France international joined Betis in a cut-price deal worth €20m (£18m/$22m) in the summer and has made a strong impression on La Liga.

Fekir has contributed seven goals and six assists to Betis' league campaign, which has the team currently sitting in 12th position.

The 23-year-old - who already has 31 caps for his nation - plays a midfield role for Dortmund which allows other attacking players such as Jadon Sancho and Marco Reus to flourish.

Brandt has contributed three goals and three assists this season.

Maguire had an uneasy start to life at Manchester United, but since becoming club captain in January, he has excelled to help lead an improved defensive unit.

After making the move to Old Trafford from Leicester in a world-record deal for a defender worth £80m ($97m). the England international struggled to establish himself as a dominant defender at the heart of the defence.

Since former skipper Ashley Young departed in January, Maguire took the armband to lead the Red Devils on a 11-game unbeaten run – including nine clean sheets.

Rodri has become a crucial cog in Manchester City's midfield despite having to shoulder a heavy load during his debut season.

City paid Atletico Madrid a club-record transfer fee of £63m ($79m) to acquire the 23-year-old - which was the amount of his buyout clause.

With defensive injuries forcing Fernandinho to play as a centre-half, Rodri has slotted in the holding midfield role seamlessly and provides a physical presence in the middie of the park.

Nkunku was deemed surplus to requirements at PSG but has now become one of the world’s best providers at Bundesliga club RB Leipzig.

The 22-year-old moved to Germany in a €15m (£14m/$17m) transfer during the summer but has since excelled playing behind Timo Werner in Leipzig.

Nkunku has created 15 goals for his Leipzig team-mates this season in an attacking midfield role.

Kulusevski has established himself as one of the most promising attacking midfielders in Europe through his exploits with Parma in Serie A.

The 19-year-old Swede was loaned out to Parma in the summer by Atalanta, before Juventus swooped in January and sent him back to the Gialloblu for the rest of the season.

He has scored five goals and created seven assists for Parma this campaign in a variety of midfield roles.

After failing to make on impression at Crystal Palace, Alexander Sorloth has turned heads with his prolific performances for Trabzonspor.

The 24-year-old joined the Turkish Super Lig side on loan from the Eagles after scoring only once for the Premier League side.

Sorloth has since attracted interest from the likes of Manchester United following his 25 goals in Turkey.

Hazard is slowly emerging from the shadow of older brother Eden in his performances for Dortmund this season.

The Belgium international swapped Bundesliga clubs in the summer - with the 26-year-old moving from Gladbach to Dortmund for a fee of €40m (£35.2m/$44.7m).

He has formed a lethal wing duo with Jadon Sancho and has contributed five goals and 11 assists to the Black and Yellows' cause this season.

Ben Yedder is duking it out with PSG star Kylian Mbappe for the Ligue 1 golden boot despite playing for struggling French side Monaco.

The 29-year-old made a surprise transfer from Sevilla to Monaco in the summer for a fee of around €40m (£37m/$45m) – despite links to Barcelona and Manchester United.

Ben Yedder’s 18 league goals – equal with Mbappe – are the reason why Monaco are sitting ninth in the standings and not fighting relegation.

Fernandes has become Manchester United’s most important player since moving to the Theatre of Dreams at the back end of the winter transfer window.

The former Sporting captain swapped Lisbon for Manchester in a deal worth a potential £68m ($88m) and has immediately transformed the Red Devils into a stronger team.

Since Fernandes’ debut on February 1, United have gone unbeaten in nine matches – winning six of them.

Former Inter captain Icardi has taken his opportunity at PSG to once again become one of Europe's most prolific strikers.

The 26-year-old joined the French champions on loan from the Nerazzurri for the duration of the 2019-20 season - in a deal completed just before the summer transfer window slammed shut.

Icardi has slotted in alongside the club's other stars Kylian Mbappe, Neymar and Angel Di Maria to help drive the team to the quarter-finals in the Champions League and a 12-point lead in Ligue 1.

The Argentine has an impressive 20 goals in 31 matches across all competitions and has pushed Edinson Cavani out of the first-choice striker role.

Lukaku has become an integral part of Antonio Conte's push to win the title with Inter and wrestle it away from Juventus.

The Belgium international joined Inter in a £74m ($90m) deal following a decision to leave Manchester United during the summer after falling out of favour.

With Inter currently sitting second in Serie A - one point behind Juve - Lukaku's 17 league goals have helped lift the Nerazzurri into championship contender status.

While he played most of his career at Old Trafford as a lone striker, he has been paired with Lautaro Martinez at Inter to great effect.

Norweigan sensation Haaland has made a stunning impression on the Bundesliga since joining Dortmund.

The 19-year-old joined the Black and Yellows from RB Salzburg during the January transfer window in a €20 million (£17m/$22m) deal after scoring 28 goals in 22 games for the Austrian club.

Haaland, whose father Alf-Inge played for Manchester City, turned down a move to Manchester United because he was 'triggered' by Dortmund's offer.

He has made an immediate impact at Dortmund, hitting 12 goals in 11 games already, while also becoming the first Bundesliga player to score eight times in his first four appearances.