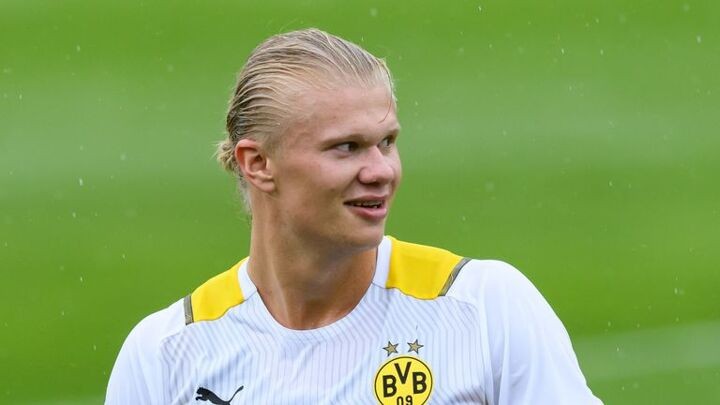 Borussia Dortmund's Erling Haaland has played down reports of a €175m summer move to Chelsea, saying he hopes "it's just rumours".

Chelsea were understood to have made an informal player-plus-cash approach for the 20-year-old earlier in July which would have seen either Tammy Abraham or Callum Hudson-Odoi move the other way.

However, Haaland poured cold water on the speculation during Dortmund's pre-season training camp in Switzerland.

"I don't really have much to say about this," Haaland said. "I have three years left on my contract and I'm enjoying my time here (at Dortmund).

"Before yesterday, I didn't speak to my agent in one month - I think you have the answer there.

Despite winning the Champions League, Thomas Tuchel's side are on the lookout for a new striker ahead of the new season after struggling in front of goal at times last term.

Haaland is believed to be their primary target, but a source close to the discussions previously told Sky Sports News they face "mission impossible" in their bid to sign him.

Dortmund are also not keen to lose another key player so soon after allowing Jadon Sancho to join Manchester United in a £73m deal this summer.

Haaland will be available for around £70m next summer due to a release clause in his contract.

How Dortmund forward could transform Chelsea

Chelsea's finishing problem predates Tuchel's appointment. It was apparent throughout Frank Lampard's tenure and it was issue for Maurizio Sarri and even Antonio Conte before him.

Eden Hazard was prolific and Tammy Abraham has impressed in patches but the club have not had a truly elite presence in the central striking role since Diego Costa's departure in 2017.

Timo Werner may yet prove himself in that regard. He certainly has the pedigree having scored 95 times in 159 appearances for his previous club RB Leipzig.

But if Tuchel is to build on Chelsea's Champions League success, he knows it would be a huge risk to pin his hopes on a player who only scored six Premier League goals in his first season in England.

Werner's struggles in front of goal became a running theme of Chelsea's campaign. Even in their Champions League final triumph over Manchester City, he spurned several golden opportunities.

The German is more culpable than most when it comes to dissecting Chelsea's profligacy last season - his big-chance conversion rate was the third-lowest among players who scored six or more Premier League goals - but the issue is a collective one.