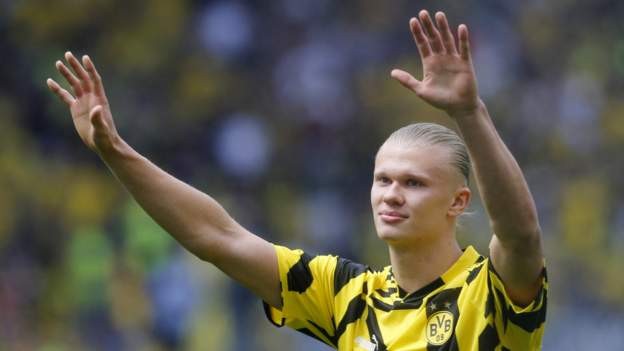 Striker Erling Haaland scored and was given an emotional goodbye in his final match for Borussia Dortmund.

Haaland, who is set to join Manchester City this summer, scored a penalty in Dortmund's 2-1 win over Hertha Berlin.

Before the game, Dortmund's last match of the season, there was a ceremony to mark the Norwegian's departure with the Dortmund fans chanting his name.

He will leave having scored 86 goals in 89 games since joining from Red Bull Salzburg in January 2020.

"It has been nothing but an honour to wear this shirt," Haaland tweeted afterwards.

"At [Dortmund] I've spent memorable moments, met special people, not to mention a fan base that has been always our extra man on the pitch.

"I'll never forget any of this!"

Haaland, who passed his City medical in Belgium on Monday, will move to Manchester in July after the Premier League leaders activated a 60m euro (£51.2m) release clause in his contract.

His penalty equalised after Ishak Belfodil's spot-kick put Hertha ahead before 17-year-old Youssoufa Moukoko struck with a winner in the 84th minute.