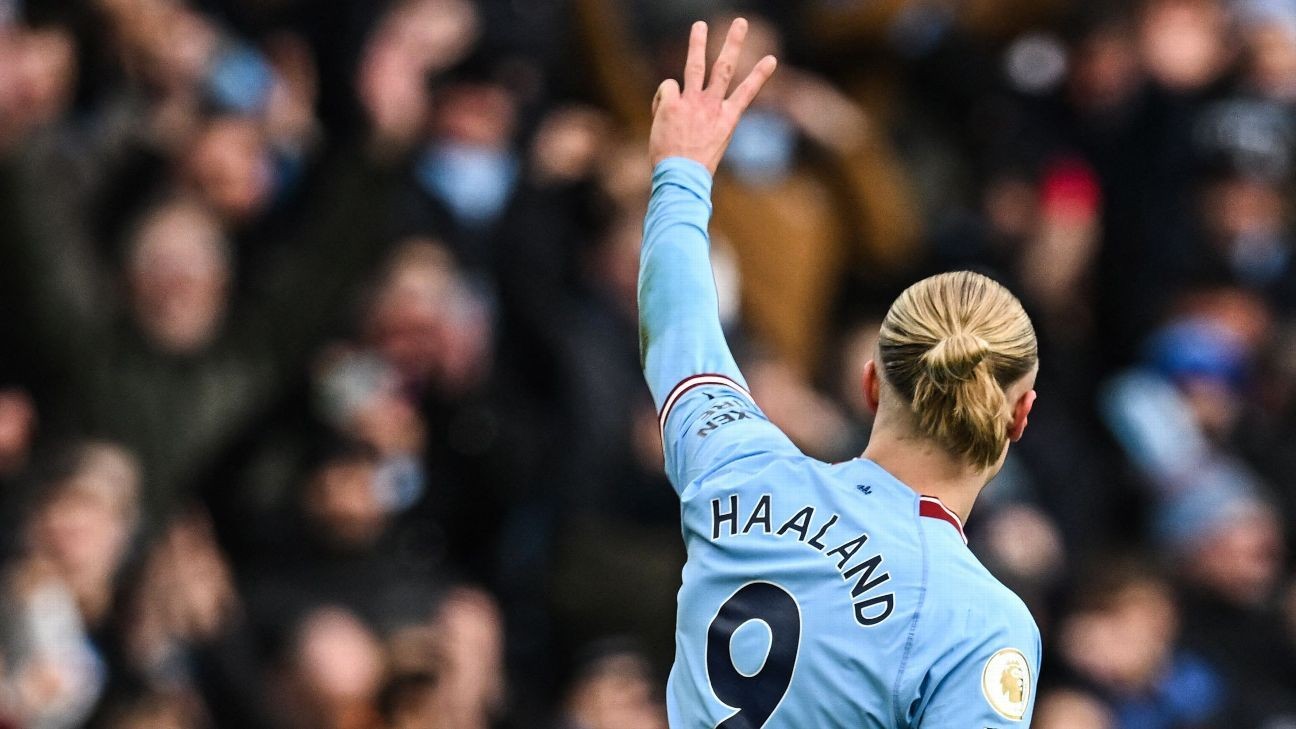 Erling Haaland's immense debut season in the Premier League continued apace on Sunday, with the Manchester City striker scoring all three goals in his side's 3-0 win over Wolverhampton Wanderers.

Haaland's match-winning hat trick at Molineux was his fourth triple in the league this season, putting him on par with Harry Kane and Alan Shearer as the only players to have ever scored four hat tricks in a single Premier League campaign. And the prolific City forward needs just one more over the course of 2022-23 to equal Shearer's all-time record of five.

The Norway international has registered as many hat tricks as the rest of the Premier League combined with Son Heung-Min (Tottenham), Leandro Trossard (Brighton, now Arsenal), Phil Foden (Man City) and Ivan Toney (Brentford) the only other players to hit a top-flight treble thus far.

Haaland has already breezed past a whole host of notable players on the Premier League's all-time hat-trick list, including Didier Drogba (3), Frank Lampard (3), Romelu Lukaku (3), Son (3) and even Cristiano Ronaldo, who split his three career hat tricks in England between his two stints at Manchester United.

What's more, Haaland is already one-third of the way to equalling Man City legend Sergio Aguero's overall record of 12 career Premier League hat tricks, despite having played 256 fewer games in the competition than his Argentine predecessor.

At the age of 22, Haaland has already scored 16 hat tricks for club and country during his senior career to date: Molde (1; as part of a four-goal haul against Brann), FC Salzburg (5), Borussia Dortmund (4), Man City (4) and Norway (2).

Since scoring twice on his league debut against West Ham in August, Haaland has already notched 25 goals in 19 Premier League games for City, meaning he has outscored the league's two joint Golden Boot winners from last season: Tottenham's Son and Liverpool's Mohamed Salah, who both finished the 2021-22 campaign with 23 goals each.

There have been 29 instances of a player scoring at least 25 goals in a Premier League season since the division was inaugurated in 1992-93 and Haaland has reached that mark in 19 appearances.

Just one more goal in the Premier League this season will see the City striker become one of 14 players to have scored 26 goals in a single campaign, thus rubbing shoulders with the likes of Thierry Henry, Robin van Persie, Kane, Salah, Ronaldo and Luis Suarez.

Haaland needs nine more goals during the second half of the 2022-23 season to draw level with record-holders Andy Cole and Alan Shearer, who have jointly scored more goals than any other player in a single Premier League campaign by accruing 34 apiece in 1993-94 and 1994-95 respectively (which were both 42-game seasons.)

Since the Premier League was cropped from 22 teams to 20 teams from the 1995-96 season onwards, only one player has scored more goals in their introductory campaign than Haaland, and that is Kevin Phillips of Sunderland, who bagged 30 goals in 1999-00.

Given his searing form and rapid rate of scoring, we suspect it's only going to be a matter of time before Haaland breaks every single one of the goal-scoring records mentioned above.