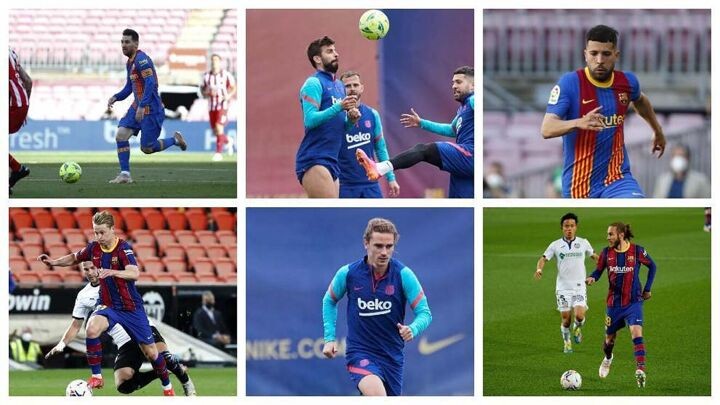 There are only three games left of the LaLiga Santander season, with Barcelona in third place but only two points behind leaders Atletico Madrid, but Ronald Koeman could find himself in big trouble on Sunday.

The Catalan giants go to Levante on Tuesday night with more than half of their team on four yellow cards, so they will miss the penultimate game of the season against Celta Vigo if they get another.

Gerard Pique, Lionel Messi, Jordi Alba, Antoine Griezmann, Frenkie de Jong and Oscar Mingueza are the players that will have to walk the tightrope against Levante and, should they avoid getting a card in that game, against Celta too.

De Jong has been treading on thin ice the longest as the Dutchman secured his fourth yellow card on February 7 against Real Betis, but he has played cleanly ever since.

Messi picked up his fourth yellow card of the season later that month against Sevilla and has since played ten games without seeing yellow again.

Mingueza and Griezmann both received their fourth yellow card against Villarreal, whilst Alba and Pique were both booked in Barcelona's lsat game against Atletico Madrid.

Despite the precarious situation Koeman finds himself in, he has already said that he isn't afraid of playing players who are one booking away from suspension.

After their match against Levante, Barcelona play Celta before finishing the season with a trip to Eibar.