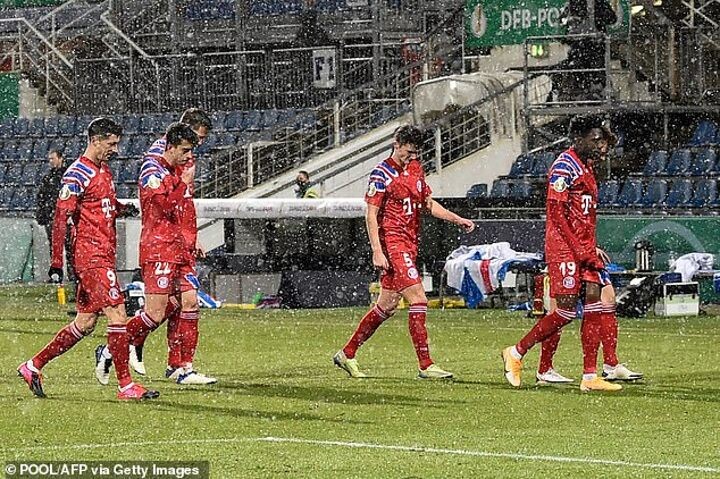 Bayern Munich boss Hansi Flick admits his side's 'engine isn't running smoothly' at the moment after they were dumped out of the German Cup by second-tier side Holstein Kiel.

Bayern have lost their last two fixtures against Borussia Monchengladbach in Bundesliga and Holstein Kiel in the German Cup, in which they were left red-faced after losing 6-5 on penalties on Wednesday - their first cup exit to lower league opposition in 17 years.

Flick has demanded an immediate response when Bayern host Freiburg on Sunday afternoon in Bundesliga, while admitting that he was expecting a slump in form at some stage.

Flick, who insisted Bayern's treble-winning heroics of last season were 'not normal', said during his pre-match press conference on Friday: 'I did expect us to experience a bit of a slump a little earlier but my team showed incredible mentality and we made it to the top of the table before the winter break.

'The engine isn't running smoothly, on Wednesday we experienced it in the most brutal fashion.

'We're making it too easy for the opponents to make chances, we have to be in better positions, we have to defend together. It's our job and it's our expectation to get back on top.'

The European champions will be desperate to put Wednesday's nightmare behind them when they take on Freiburg, but Bayern certainly know it won't be an easy task.

Freiburg have won five successive Bundesliga games and have been prolific in front of goal this season, and Bayern will have to be at their best defensively to keep them at bay.

But Bayern are going through a tough patch in defence, having failed to keep a clean sheet in Bundesliga since October while conceding the joint sixth-most goals in the league this season (24).

And Flick, whose team's last clean sheet in all competitions came against Lokomotiv Moscow on December 9, has urged his whole side to work their socks off to change their defensive fortunes against Freiburg.

Bayern could be leapfrogged in first place in the league if RB Leipzig manage to beat Wolfsburg away on Saturday.

'It's going to be an intense game, Freiburg is known for that type of football. They're scoring a lot of goals,' Flick said.

'It's going to be about us and how we play in defence. It's down to us, the disappointment we had to digest pretty quickly, we have to make the best out of the situation now.

'The whole team is under pressure in defence, it's not only the back four. We're not getting enough pressure on to the ball, not as much as we used to.'